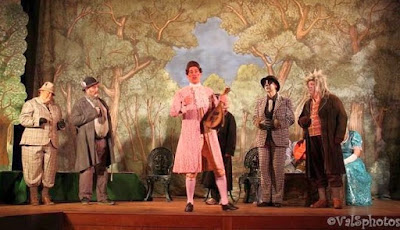 Trinity follow their “night-in-the-museum” Pirates with a surreal Trial by Jury. Part Wind in the Willows [remember the rabbit jury ?] part Alice in Wonderland, part panto, Tony Brett's production had Cinders suing her Prince for breach of promise. Buttons, who traditionally might have the better case, is the judge here, and of course gets his girl before the final chorus.
A riot of colourful costume – sugar-pink piglets for the bridesmaids, a presumably perjurious Pinocchio, Fox, Hedgehog and Toad, a Mole with cap and pink gloves, a Badger in a natty black-and-white suit. And the whole jury glued to their animal husbandry centre-folds. Many enjoyable performances, too: Gavin Jarvis the Prince, Kayleigh McEvoy his accuser, and the inimitable Patrick O'Brien playing the Learned Judge to the manner born. Directing the music from the upright piano: Gerald Hindes.
In the curtain-raiser concert – Savoy Opera snippets with a legal theme – O'Brien was the insomniac Lord Chancellor, Jan Moore a splendid headmistressy Fairy Queen, and Howard Brooks and Tony Brett the Mikado and Koko, an oriental fan the only clue, thank heavens, to their Japanese ethnicity...