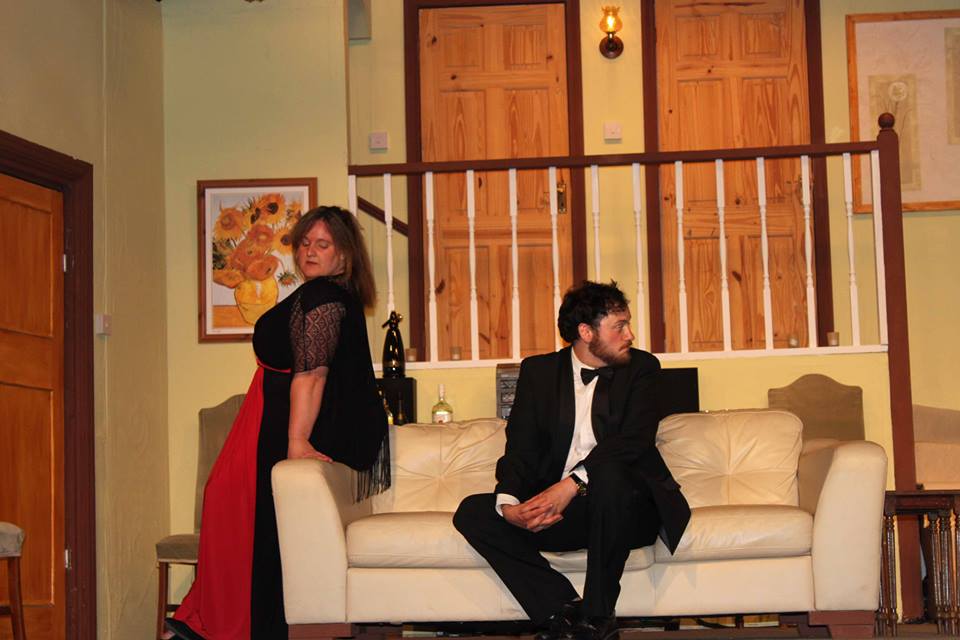 Something of a stylistic exercise for playwright Neil Simon – the challenge of farce too hard to resist, maybe.
He's managed a classic of the genre – mistaken identities, frantic activity, improbabilities piled high. This is the British version, relocated to Surrey, though without the nuances of class and milieu that might suggest.
Chrissie O'Connor's hugely enjoyable production for Guildonians was pacy and meticulously plotted. The set-pieces – lost ear-rings, phone duologue – were stylishly and confidently done. The six-door split-level set was a masterpiece, and the Eighties were lovingly evoked – big hair, shoulder pads, La Bamba on the huge stereo, hostess trolley … The guests at the party were elegantly dressed, though not everyone convinced as the sort of moneyed person who flits from one charity do to another.
But there wasn't a single weak performance in this ten-strong cast. Particular plaudits to Kevin O'Connor as Ken – hilarious when deafened – and Charlotte Jones as his wife Chris, with a nice line in terminal exasperation. Copy-book comic timing from Tim Tilbury as Len, with a brilliant monologue in the closing minutes, and a splendid stock character from Tony Szalai as the weary copper who tries to make sense of all the stories.
on Sunday, June 15, 2014

What a thoroughgoing, pleasant Saturday afternoon treat. A trouble-free drive to and from Harold Wood with the A12 behaving itself. Easy parking, a hall with seats having superb leg room and windows open to allow cooling breezes to cross us. Plus a farce by America's greatest living playwright and my favourite, Neil Simon. In an edition specially adapted for us by the author.
Set in 1989 in a “comfortable Surrey home” with a very strong cast doing justice to the writing and directed with care by Chrissie O'Connor.
Just as with the master farceurs of old, Simon cleverly sets the wheels turning so that they keep moving until the plot runs out of steam and calm is restored. Or is it? Is the status quo really going to survive the endlessly inventive mind of black tie-clad, stuffy lawyer Ken played by a beautifully twitchy Kevin O'Connor? He is desperate to protect from scandal the unseen Charlie (a very senior Civic Servant) in the ensuite bathroom, who has shot himself through the earlobe. Think about it – how exactly do you manage that with earlobes that lie parallel to your head?
Ken's wife Chris, an elegantly dressed for the party Charlotte Jones, womanfully struggles to make sense of events that rapidly escalate as new guests arrive.
Catherine Attiwell's Claire enjoys gossip and there was a good rapport between her and Tim Tilbury's Len, the tax consultant whose new BMW has been attacked with both of them reacting hysterically to the bad news about Charlie.
Enter an amorous couple, the bewildered, naif, squeaky-voiced Cookie (Susie Faulkner) and Ernest (Tom Hind) a psychiatrist, who created a delightful comedy cameo as we waited for the penny to drop. His masterful delivery of a speech at double speed brought applause from the audience.
Adding to the confusion were Mark Godfrey's controlling husband and prospective Tory candidate Glenn, desperately anxious to protect his reputation. Sharon Simms was his angry wife Cassie.
Finally, after Simon had built the ensuing mayhem to dizzying heights, the police arrived. Tony Szalai's PC Conklin was a perfect stereotype even to the way policemen use their jargon, ably supported by Louise Macmorrin's WPC.
Everybody knew exactly what type of play they were in, and that's not always the case with farce. It overflowed with pace and high energy with no weak actors. The appropriately furnished set by the director and her team was solidly built with so many doors I lost count of them. Sound effects were good. Costumes were pure 1980s' evening wear with varyingly flattering frocks and plenty of bling. And calloo callay, oh frabjous day – the icing on the cake - a really prompt curtain call in character.
“I'd just like things to be the way it was before it became the way it is.” summed up this play as characters constantly thought of ever wilder excuses for their own and other people's odd behaviour.