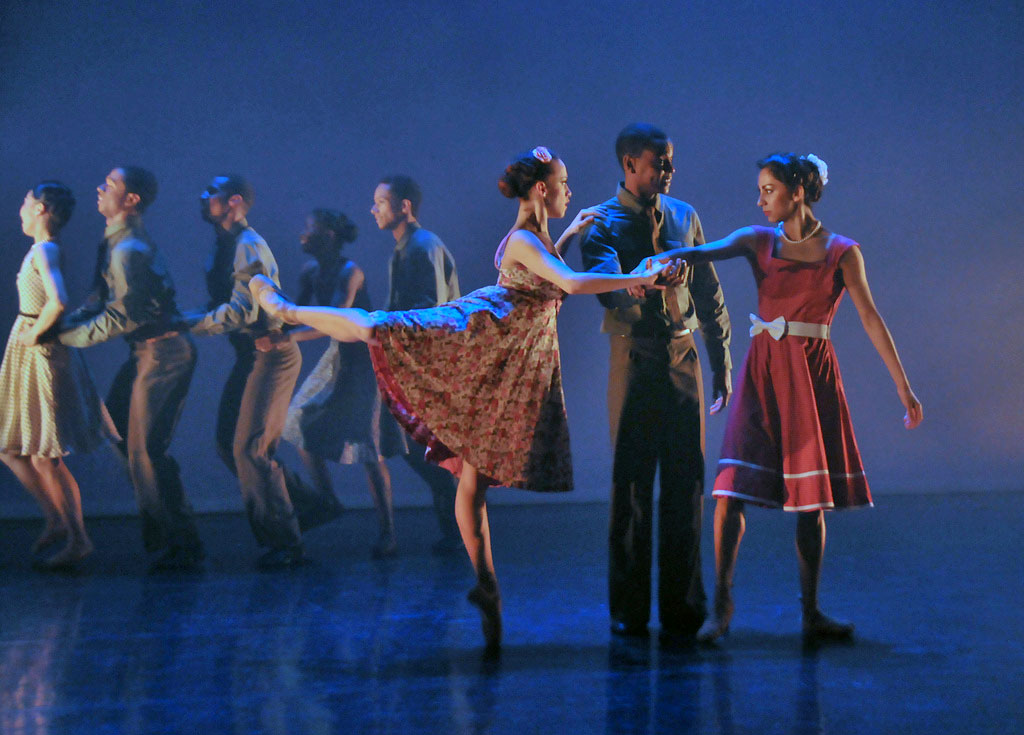 Christopher Marney at the Crypt on the Green, Clerkenwell
03.06.2014


Fifteen years after he left the Central School of Ballet – and the inspirational guidance of Christopher Gable – Christopher Marney has been back at the School, developing his choreographic work for a Master of Arts.
In an historic crypt in Clerkenwell, this impressive showcase sampled all the pieces he's devised during the last eighteen months, performed by dancers from Ballet Black and Ballet Central.
The focus is on narrative dance. In the two extracts from War Letters [Ballet Black] we saw first a lively Dance Hall, with a conga line, lots of swirls and lifts to Shostakovich and the dreamy Moonlight Serenade. And throughout, there is eloquent interaction between the girls and the GIs on the floor …
And then The Heavy Coat, an interpretation of Vicky Feaver's poem in which the coat becomes a character in its own right, as well as a potent metaphor for love and loss.
Anon!, which I first saw in Ballet Central's 2013 tour, uses Delibes' Sylvia music for a cheeky tale of fantasy football as the geeky girl [engagingly danced by Amelia Jackson] meets Duncan Anderson's somewhat abashed soccer captain. A proud pyramid, some lovely slomo, and a tender pas-de-deux.
Two of a Kind [Ballet Black] follows the journey of a relationship – the warmth and subtlety of the interpretation made it easy to believe in the feelings the four dancers expressed.
The finale – a highlight of this year's Ballet Central tour, too – was Carousel Dances, Marney's tribute to the dream ballet world of the classic musical. Clearly a labour of love, the piece is also underpinned by thorough stateside research, talking to dancers involved in early productions and studying Agnes de Mille's original choreography. This is a dazzlingly inventive work – with minimal lighting and four striped poles it conjures up the world of the showgirls and the barkers, and the merry-go-round itself, in a moving, hugely enjoyable celebration. The full-blooded pas-de-deux [If I Loved You] was exquisitely danced by Duncan Anderson's Barker Boy and Emma Walker's Louise.


Marney is probably best known for his work with Matthew Bourne. But as this showcase proves, he is an inspired choreographer in his own right, and we eagerly await more of his work in this narrative genre especially. Next spring, he's creating a new piece for Chelmsford Ballet Company – 18th to 21st March – it's in the diary already …

Coat
Sometimes I have wanted


Sometimes I have said


you would not let me
breathe or move.


But now that I am free


to choose light clothes
or none at all


I feel the cold


and all the time I think
how warm it used to be.