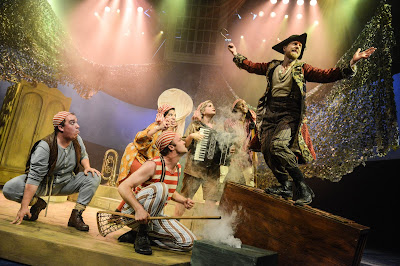 A magical, enchanting Peter Pan to follow James and the Giant Peach and Wind in the Willows onto the Mercury stage in the long vacation slot.
Not just another attempt at the increasingly popular summertime panto, but an adaptation, by Daniel Buckroyd and Matthew Cullum (who also shared directing duties), which manages to seem fresh and child-friendly while still respecting J M Barrie's original.
The nursery furniture is shrouded in dust-sheets as we arrive. Simon Kenny's set is uncluttered and inventive, shape-shifting to the Neverland island and the deck of the pirate ship. Drawers pull out to form beds, the crocodile is suggested by a pair of headlamp eyes before making its spectacular final appearance.
The story – quite complex for the youngest minds – is bookended by a prologue and an epilogue in which the actors tell the story in the time-honoured Nicholas Nickleby style. Their boisterous play foreshadows adventures to come (except perhaps for the farting teddy-bear).They are musicians too, and apart from Wendy (Charlotte Mafham) and Peter, play multiple roles. This doubling is very slickly done – the performers rarely leave the stage altogether – and is often part of the entertainment; the Lost Boys are picked off one by one only to re-enter moments later to swell the pirate band. Particularly impressive character work from James Peake as Nana, a convincing canine in fur coat and flying helmet, as well as Cecco the pirate and the know-it-all Slightly Soiled, and Alicia McKenzie as a feisty fairy Tinkerbell and a peg-leg pirate Jukes.
Peter himself is played by Emilio Iannucci, a winning blend of innocence and bravado, and Pete Ashmore, a familiar face on the Mercury stage, takes on the traditional pairing of Mr Darling and Captain Hook. Not your average old Etonian, maybe, despite his dying words, but he handles his cod-Shakespeare convincingly.
“I do believe in fairies,” whispered one little girl in our row, in a moment of unprompted empathy. The production is aimed squarely at children, as is only right, though there were subtleties to satisfy the most jaded adult palate, and the ingenious costume and scene changes help to maintain our interest. All the magic is that special theatrical kind, where our imagination is willingly co-opted to do half the work. Tinkerbell dances as a light on the end of a long wand; Curly's kite is attached to a stick. And, though there's no Kirby, no Foy, the flying sequences are thrillingly done in the simplest way possible.
It is very pleasing to see several editions of the book on offer amongst the crocodile merchandise. And of course, as Barrie intended, the production will benefit the beleaguered Great Ormond Street Hospital.
The sad and the sinister are not neglected: Peter's unwillingness to be touched, or the “tragedy” of the ending, in which Wendy's daughter assumes her role as mother to Peter and the Lost Boys.
Richard Reeday's music underpins the action – there are few big numbers – and it's fun to see the flute, the tuba and two violins shared amongst the colourful characters.
The final tableau sees Peter framed in the window, still looking out beyond the stars to the Neverland, before the braver children in the audience are allowed to explore the nursery for themselves, try out the beds and peek into the delightful dolls' house where Peter's shadow was hidden.