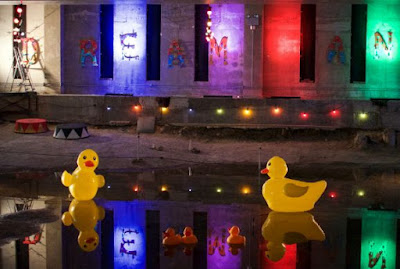 A Dream to add to the pantheon, to join the “bathroom accessories” and the “30s Hollywood”, both from Shakespeare's Globe.
The theme this time is fairground. It works perfectly in this space, renowned for its chamber Shakespeare in an immersive style.
“Roll up, roll up ...” from the foyer, where you're encouraged to pin the tail on the donkey's bottom, to the intimate performance area, [Sullivan's hymn on the calliope], where there's inflatable hoopla and a card trick in which Verona meets Athens.
Once the main event gets underway, the gimmicks are reined in, with little details – the candyfloss, the inflatable dainty ducks, the goldfish-in-a-bag lanthorn – to bring us back to Dreamland, the name picked out in fairy lights over the water.
Alex Pearson, who has years of experience of bringing the Bard to life within these walls, gives us a lively, physical and very entertaining Dream. The grouping is perfectly planned, the rehearsal sequence wickedly observed. The mischief in the wood is lively and often very funny, the boys wrestling on the forest floor as the girls spar verbally. Theseus and Hippolyta dance cheek to cheek, the lovers sleep on the further shore, which does seem a little less involving after the proximity of the Mechanicals and Titania's bower.
A cast of eight, with much doubling. Not just the obvious Titania/Hippolyta [Cindy-Jane Armbruster] and Theseus/Oberon [beautifully spoken by Ian Hathway], but Robert Hazle, impressive both as an aggrieved Egeus and a fussy Quince, Rhiannon Sommers as Hermia, eloping with her luggage, and a shy Snug, hiding behind her buoyancy-aid Lion. Nick Oliver is a compelling, lustful Lysander, casual in a tee-shirt, as well as Starveling, Clark Alexander Demetrius, formal in a collar and tie, as well as a hilarious Thisby. His Pyramus – their death scene endlessly inventive – is Sydney Aldridge, pulling off the tricky double of Helena, comfort eating when the course of true love runs less than smooth, and Nicky Bottom, done as a sulky teen diva, slurping a slushy, chomping on a carrot as she recalls her dream. A triumph in the role, the most memorable female Bottom since Dawn French's wartime Dream of 2001. Equally engaging is Elinor Machen-Fortune's Puck; she's also an officious Philostrate, introducing the interlude and the Bergamasque jig, before coming back as Robin Goodfellow to bid us goodnight.
The audience is frequently drawn in to the action – as confidants, and, in the case of front-row Ricky, to play a very convincing Wall.


With his new company Unfolds Theatre, producer Pepe Pryke has brought to Shakespeare's Bankside an enchanting summer show for all the family – “swift as a shadow, short as any dream...”
on Sunday, August 13, 2017