ONE DAY WHEN WE WERE YOUNG 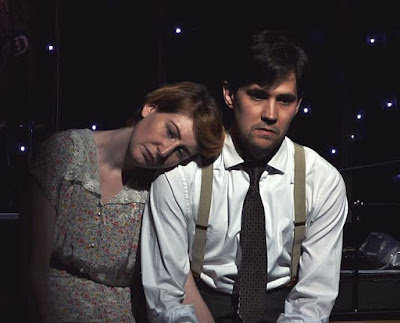 ONE DAY WHEN WE WERE YOUNG
Chelmsford Theatre Workshop at the Old Court
17.05.17

Nick Payne's two-hander allows us to eavesdrop on three brief encounters between Leonard and Violet, spanning six decades. Beginning in 1942 – an illicit night in the Hotel Regina before he goes unwillingly off to war – then 21 years later – a painfully awkward meeting in a Bath park – and finally in the 21st century – in Leonard's lonely Luton home.
These are carefully drawn characters, ordinary people leading lives superficially banal but with emotional hinterlands they struggle to express. Laura Bradley and Lewis Schaefer give performances of exceptional subtlety and understated sentiment. They wisely avoid caricature as they age; Violet's chatter about washing machines and Wimpy Bars places her in the 60s in middle age, while Leonard's restless hands and lips movingly suggest the ailing octogenarian.
Ria Milton's production is near flawless, with sound and light, music [Isaac Dunn the talented cocktail pianist] and staging combining to excellent effect. The only criticism, the sight-lines, especially when the actors were sitting on the bed/bench/sofa.
And there's a bonus – a seamless prologue, with chorus dressed for the 40s, giving us a mixture of the tragically appropriate When One Has Lived A Long Time Alone by Galway Kinnell and some Shakespeare sonnets, Leonard's wartime gift to Violet. Some of the most effective being those audaciously delivered by two or three actors: Sonnet 36 as a duo or Sonnet 106 a la Andrews Sisters.
A wordless epilogue, too – the chorus leaves the stage, the audience leaves the auditorium, while Leonard and Violet linger with the book of sonnets and a lifetime not shared …

Email ThisBlogThis!Share to TwitterShare to FacebookShare to Pinterest
Labels: chelmsford theatre workshop, ONE DAY WHEN WE WERE YOUNG, the old court