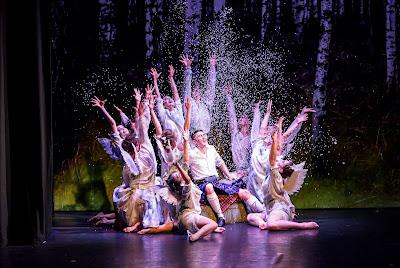 an updated version here, for The Reviews Hub, at Colchester Mercury

For this, his inaugural tour as Artistic Director, Christopher Marney has put together a stunning varied programme: a two-hour showcase for the emerging talent of the Central School of Ballet.
Thirty young dancers, seven presentations, book-ended by two fresh looks at familiar repertoire. The last, and the longest, was Matthew Bourne's Highland Fling, first seen in 1994. It's a typically tongue-in-cheek take on La Sylphide, keeping the gist of the original story, and the Scottish setting, but giving it a make-over for the Trainspotting generation. So as well as the silver birch backcloth, the setting includes an old armchair and some dustbins down stage left. The Sylphs sport little angel wings, James a kilt. Plenty of fun in the glade, with young James eager to join the corps, until suddenly the mood changes as his beloved's wings are clipped. Beautifully danced, and imaginatively staged, with athletic work from Adam Davies, and a moving performance from Brittanie Dillon as the Lead Sylph.
Jenna Lee's Romeo and Juliet – the Ballroom scene – uses Prokofiev's score in an original, eloquent narrative. Amy McEntee's Juliet is shy and apprehensive with Paris and has some lovely moments with her two friends. The Montague boys do some spectacular showing-off. There is romance of course, but frustration too, with the dancers forming barriers between Juliet and her Romeo [Craig McFarlane] And then a brief expression of innocent joy before the tragedy we know is to come.
A stylish glimpse of La Bayadere, with scarves, an impressive pas de deux, and a traditional tableau to finish.
In more contemporary work, we see fluent avian grace in Liam Scarlett's Indigo Children, edgy urban graffiti in Sleepless, choreographed by Malgorzata Dzierzon with music by Philip Feeney, played live, and Christopher Bruce's enigmatic Mya, danced to Arvo Part – three cocooned figures moving in witty, wistful shapes and patterns.
And a memorable look at the Castle Dracula scene from the ballet created in 1996 by Michael Pink and Christopher Gable, with an original pastiche score by Philip Feeney. Haunted by succubi, Alvaro Olmedo has a strong, erotically charged duet with Matthew Morrell's magnetic, hypnotic Count.
As ever, a wonderful display of burgeoning dance talent, and an excellent sampler of what ballet can do. If you missed it at the Civic, it's at the Mercury in Colchester in June, and at the Kenneth More in Ilford in July.