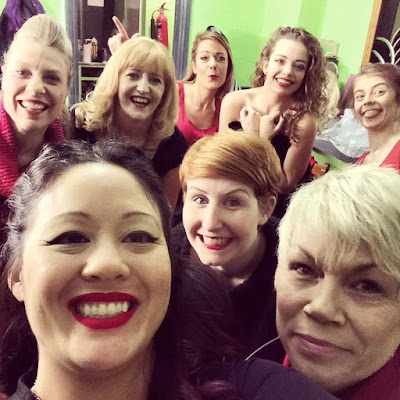 THE VAGINA MONOLOGUES
Chelmsford Theatre Workshop
at the Old Court
27.01.16


Eve Ensler's docu-drama is twenty years old now. The world has moved on, and inevitably the piece sounds a little dated in places.
But this revival, directed by Sally Ransom with Ria Milton and given a simple but sophisticated setting in the Old Court, brings out the best in these very varied testimonies; one of the most consistently accomplished productions at this address in recent years. Star cloths around the auditorium, coffee tables and bar stools for the three leading women, red lipstick, red lip cushions on the soft sofas where the supporting cast “relax” before and during the show...
Confident performances in the round from those three leads: Laura Bradley, Kelly McGibney, Caroline Dunsmuir.
They all get under the skin of these anonymous respondents who opened up to Ensler all those years ago – superbly characterized performances. Scathing about “marital therapy” and shaving, holding a mirror up to nature, crying with embarrassment in the women's workshop, poignantly recalling a flood down in the cellar and a Burt Reynolds recurring nightmare, finding heaven with a sapphic secretary, reclaiming the c-word with neat capital letters on the blackboard, giving up tax law for sex work as a moaning dominatrix – variations echoing from all corners of the auditorium – angry about floral perfumes, thongs and invasive medicals. There was much laughter, very little of it embarrassed, entertainment as well as empowerment. Darker moments, too, with the memories of Bosnian rape victims and the homeless.

The linking passages – quick-fire answers to questions about scent and dress sense – are polished, and bring the audience gently in to the performance. As a prologue, chanteuse Alice Masters does a lovely cabaret set, climaxing with the Mooncup Love Your Vagina song. And there's a specially written piece by Jo Green, very much in the VM style, performed by Gemma Robinson, Anastasia Niamh and Helen Quigley. “He Told Me He Loved Me” highlights the familiar tragic disillusionment of women tricked into sex slavery. Raising awareness of global movement Stop the Traffik. Which we can also support before and after the show with bespoke cocktails, cupcakes and chocolate. Now that does sound like a girls' night out ...