THE SEARCH FOR THE HOODEN WILL 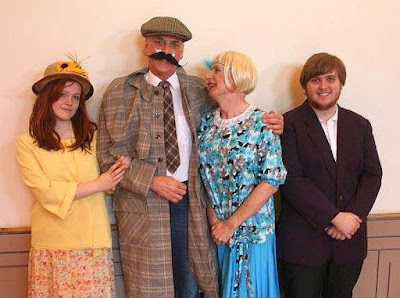 THE SEARCH FOR THE HOODEN WILL
Blackmore Players at the Village Hall
21.01.16
for Sardines

A pantomime whodunnit ? One step up from the comedy thriller, and a refreshing change for Blackmore Players' traditional Christmas show.
And home-made through and through. Doubtless countless sparks and sound operators have been convinced they could do a better job than the playwright and the director. But at Blackmore they've gone one further and actually seen it through from page to stage.
Producer Andy Appleton – sound effects – and director Tony Pavitt and Dave Smith – lighting – are the creative team behind The Search for the Hooden Will, a gleeful blend of Dame Agatha and Dame Trott, with sly references to the classics of the murder mystery – not to mention Cluedo – as well as all the panto tropes we rightly expect.
The script has some very clever touches – the supermarket sequence, the ingenious dénouement – as well as a geeky Star Wars moment and a House Song nicked from The Kinks.
Like all the best pantos, it's a gender fluid affair. Patrick Magee is the lady of the manor, and Linda Raymond makes an excellent job of the Chief Inspector, supported by “the cream of the force”: a promising double act from the two coppers Rebecca Smith and Jenny Pavitt, and two cute police dogs, Jean Appleton's endearing Nickel and Christian Vince's puppyish, extrovert Carbon.
Keith Goody has fun switching between the Hood brothers, while Simon Haskell plays “every Tom, Dick and Harry” in support. Barbara Harrold and Martin Herford both bring impressive panto experience to smaller roles. Juliet Ware, Rhys Burrell and Emma Thwaite are the Hood children, with Charley Magee very watchable as the barrow-boy Freddy.
There's a train sequence, of course, a lovely street-scene backcloth, and, best of all, a duet with a phantom projected onto a bed-sheet.
The musical numbers range from the Music Hall – Underneath The Arches works very well – to Suzi Quatro, Born To Be Wild to Ilkley Moor. Where Did You Get That Hat is beautifully choreographed, with a Charleston big finish.
The pace could be slicker, cues picked up quicker. And the stage left exit proves annoyingly awkward [for the cast, too, probably]. But the show is often witty, wacky and clearly delighted the vocally enthusiastic first night crowd: “It's the theatre that people want!”
I don't think I'm giving anything away by revealing that the wedding walk-down is replaced by a jail sentence, and the last line is “Everybody duck!”. But if you want to know whose finger is on the trigger, or what's in the will, or what the Inspector's name might be, you'd need to get one of the few tickets left for this “universal première” or wait for the inevitable movie ...

Email ThisBlogThis!Share to TwitterShare to FacebookShare to Pinterest
Labels: blackmore players, sardines, THE SEARCH FOR THE HOODEN WILL