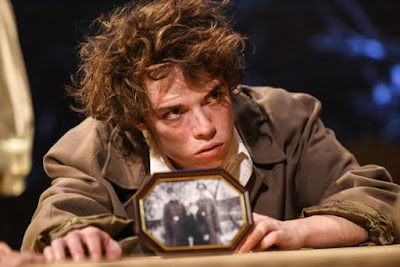 THE SILVER SWORD
Sell a Door at the New Wolsey Theatre, Ipswich

04.11.2015
An ingenious adaptation of Ian Serrailler's much loved classic. Four refugee children make their perilous way across a Europe torn apart by war. The Balicki children are seeking their parents; they somewhat reluctantly agree to their friend Jan tagging along.
Migrant children fleeing conflict are sadly not unknown to today's young readers. There are many explicit parallels in Susie McKenna's stage version, including a heartfelt plea for us all to shoulder some of the responsibility for the welfare of these vulnerable victims of war.
But the human, often amusing, story does not feel like an appeal or a homily. It's given its structure by a rag-tag company of strolling players, actor/musicians who feel part of a tradition much older than Europe's political borders. “There's a place beside the fire for the teller of the tale,” they sing. And the tale they decide to tell is a story of hope, a risky adventure at the end of which “the luckiest girl in Europe” does indeed find the father and mother she lost in Warsaw.
Strong performances from a mostly young cast. Rachel Young is Ruth, struggling to keep her siblings together on the journey. And Tom Mackley is outstanding as Jan, a wayward, light-fingered liability on their quest.
The many adult roles are doubled. Nathan Turner is excellent as the kindly Ivan, Jim and Joe, “the optimistic voice of the occupation”. Alexander Knox plays Adam, as well as Major Hargreaves, whose Coward-ly solo number is a delightful pastiche, leading into a trio of “plunder” quartets, in which he manages to join the ranks of the Andrews Sisters.
Princess of the Brazen Mountain is another lovely song, led by local favourite Julian Harries, who plays Joseph, the father, amongst other roles. The music, by Steven Edis, suggests the folk tradition of Poland, and flows naturally from the narrative.
Back projection of historical photographs reminds us of the real people displaced by the fighting. Music and lighting combine to give an epic, expressionistic air to key moments.
The improvisatory feel is enhanced by the objets trouvés animal puppets by Scott Brooker: Ludwig the rag rug dog, Bistro the chimp, Jimpy the kitchen utensil cockerel.
A moving production, using the rough magic of theatre and story-telling to bring a gripping yarn to new audiences, and to remind us all of the innocent victims of war. Not all of whom can share the happy ending Serrailler gives to Ruth, Edek, Jan and Bronia.
on Tuesday, November 10, 2015