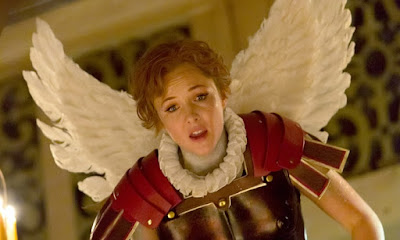 30.10.2015
Rossi's Orfeo was one of the first operas to be staged in France. Like many other operatic versions, it explores the ancient myth of the musician who loves Eurydice and loses her in the Underworld.
But Orpheus's fatal backward glance is only one element in a complex plot which gives comic prominence to Eristeus, rival suitor to Eurydice. Before the tragedy of the final act there's much comic fun to be had from mortals and gods in Christopher Cowell's witty, sometimes earthy, new translation.
The intimate, candle-lit stage, despite its restrictions, sees some excellent movement and dance, as well as some stunning stage effects, all of them authentically low-tech. The wedding feast plunged into darkness, Venus flying down, the red thread spun by the Fates. Keith Warner is the inventive director.
Musically, the piece has been sidelined by Monteverdi, Gluck and others, but there is some gorgeous arioso work, as well as choruses and instrumentals – Christian Curnin and the Early Opera orchestra are up in the gallery as they were for last year's L'Ormindo. Music and drama fuse most successfully, perhaps, in Orpheus' lament, powerfully wordless at first. There's a gorgeous duet for the lovers at the end of Act One, too.
I was lucky enough to hear two Orpheuses [?Orphei]. Mary Bevan's rich tone particularly moving in the final act. For the early performances, a throat infection meant that the title role was entrusted to Siobhan Stagg, who gave an engaging performance that was remarkably polished both dramatically and vocally. The other castrato role – Aristeus – was excellently done by Caitlin Hulcup, seizing every opportunity the score and the translation offer. Both Hulcup and Bevan, in the gentle candle-light, could well pass for counterfeit counter-tenors. The boy Cupid, too, is brilliantly convincing in Keri Fuge's cheeky characterization. Louise Alder is a strong Eurydice, Sky Ingram a splendidly elegant Venus. Graeme Broadbent brings his rich bass and comedic flair to Pluto and the Satyr.
This early opera, originally twice the length, and conceived for a much bigger stage, fits well into the Jacobean jewel-case of the SWP. It is a considerable achievement to give 21st century audiences a sense of what it might have been like to experience this experimental music drama back in 1647, and more importantly, of how gloriously enjoyable it might have been.