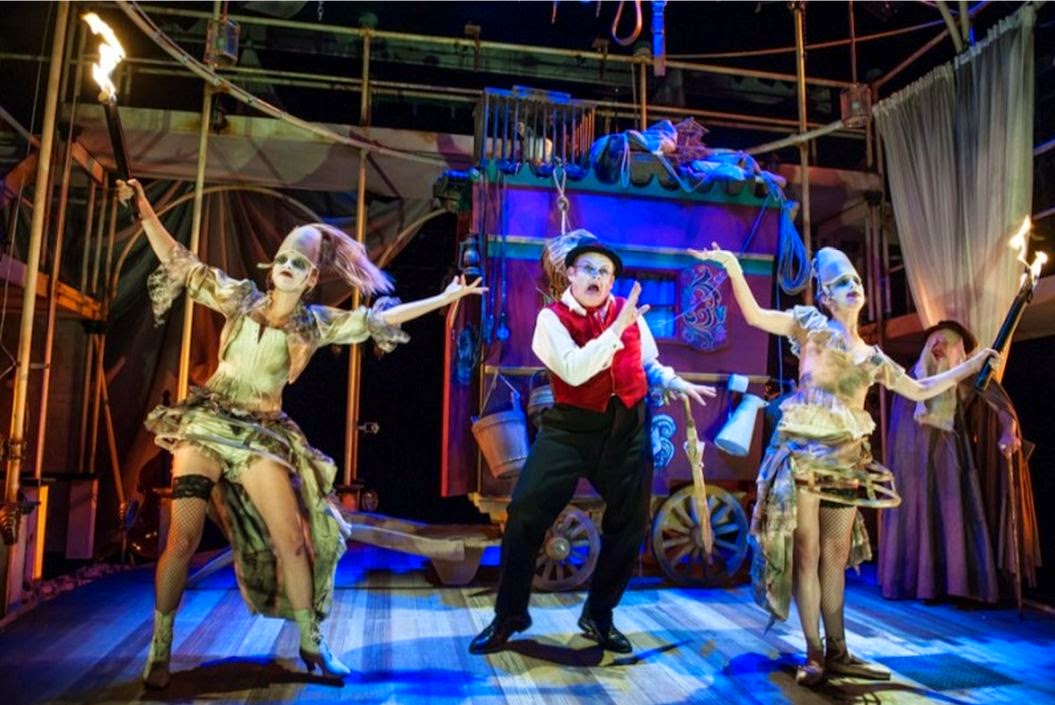 Cut to the Chase – versatile multi-talented actor/musicians - back on top form in this brilliant revival of Pomerance's powerful drama, directed by Simon Jessop, combining spectacular theatricality with intimate exchanges.
This is outstanding work by any standards. Difficult to remember, sometimes, that this is a small regional repertory company. Strong concept, marvellous music, the director's vision and amazing acting all ensure a memorable two hours in the theatre. The story is that of Joseph Merrick, whose increasing deformity makes him an object of curiosity, at first in country fairs, and later in London society.

Mark Walters' stunning set, with its sloping circle surrounded by gauze curtains and its scaffolding galleries on either side, recalls a music hall or a place of worship. We're in the world of the circus and the freak show – that “vast revolving show which never seems to end”. Footlights around the ring; suspended above, with ropes and pulleys, the tin bath and other accoutrements.

Into this arena come the Victorian characters of the drama. Treves, the physician – a scientist in an age of science - who will rescue and then befriend the Elephant Man. He's played with quiet authority, and later with moving misgivings, by Fred Broom. Carr Gomm, chairman of the London Hospital, a striking giant projected image at first, sees the welcome return to these boards of Stuart Organ, while Ross, who will exploit Merrick's appearance for profit is played with superlative style by James Earl Adair. Joanna Hickman stands out in an impressive double role – the legendary actress Madge Kendal, carefully rehearsing her greeting, and the all-important cellist.

Merrick himself, his appearance suggested first by a battered hat and sacking mask, is given a magnificent performance by Tom Cornish, who miraculously assumes the deformed shape as it is described to us. He brings out the intelligence and sensitivity of this tortured soul, especially in the more intimate scenes, with Mrs Kendal, for instance, or with Treves, tenderly sponging him down in that tin bath.

Music [Steven Markwick] plays a key role in this production, from the whirling carousel of the introduction to live accompaniment – Treves on violin amongst others – songs and found percussion on chains and metal poles.

So many heart-stopping moments: the French song as the rain pours down on Merrick and his keeper. Romeo and Juliet unravelled. The entrance of the freak show cart, chickens cooped on the roof, through light and fog in a vision worthy of Fellini. Treves' dream, in which, in shadow-play, the roles are reversed and Merrick presents his flawed saviour as a medical specimen, his own words twisted and distorted. And at the end, his model of St Philip's completed, the Elephant Man can take up his bed, offer the comfort of pillows to the souls around him, before his agonising death. Moving images play across his tortured body as we hear Gomm's account of his life, and Merrick's own poem, and light streams forth from the tiny windows of the church.

Email ThisBlogThis!Share to TwitterShare to FacebookShare to Pinterest
Labels: Cut to the Chase, queen's theatre Hornchurch, THE ELEPHANT MAN