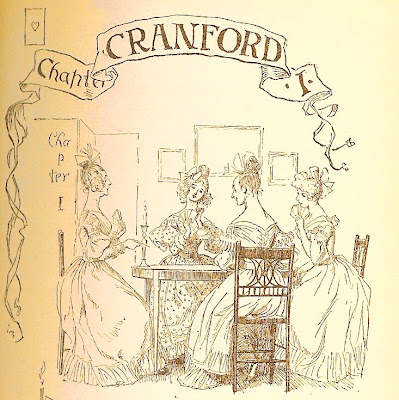 Not easy to put Mrs Gaskell's charming stories onto the stage. Luckily, in Martyn Coleman's 1951 version, she's on hand to help. Her portrait replaces the title cameo, and her disembodied voice [Lindsey Crutchett] guides us into Miss Matty's finely furnished parlour.
The tinkly doorbell is rarely silent, as a succession of bonneted callers bring fashion tips and gossip to share over a tisane or a hand of Preference.
Character work to relish from Julie Salter as Betty Barker, Margaret Corry as the snobby Mrs Jamieson, and Jean Morris superb as little Miss Pole. Kathy Smith makes a lovely Lady Glenmire, the only true aristocrat, and the least pretentious.
Claire Hilder is the young Mary Smith [the author in her youth], friend of our hostess Miss Matilda Jenkins, who is confidently played by Amy Clayton. Entertainingly frustrated by her new maid, later her landlady [Laura-Leigh Newton], Clayton is at her best perhaps in the few sombre moments, facing financial ruin or the death of an old love. The play leaves her pushing Pekoe to her social circle.
An almost exclusively female circle, enlivened by Martha's "follower" Gary Ball, and the bluff Hoggins [William Wells], a fan of Pickwick, published in instalments, like Cranford itself.
This most enjoyable dramatization remains remarkably faithful to the style and the culture of the book, notwithstanding nods to nudity and bondage [neither of them on stage, thank heavens, and neither of them anywhere to be found in Mrs Gaskell's chaste pages …]
Cranford was directed for Hutton Players by Margaret Goldstone.