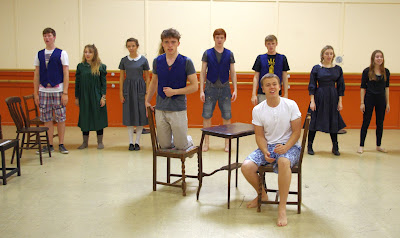 A premier production and a fond farewell, this truly unique evening was an outstanding example of ambition, talent and professionalism.

Raising funds for a place at the Music Theatre Academy, Sam Toland had assembled a remarkable company of outstanding singers. The piece he chose was not an easy option – adapted from a controversial play, exploring topics taboo back in the 19th century and still edgy today. With a demanding rock score, involving a range of styles and lots of hand-held microphones.

It took some time for me to be won over to this radical approach – almost a travesty of the original Wedekind, I felt, with the period costumes and the in-your-face lyrics and brash music uneasy bedfellows. Could this unsubtle version hope to capture the power and the passion of this seminal play ?

The performers coped manfully with the clunky American reworking of the text, but it was the music, the natural idiom for most of these youngsters, that carried the emotional charge of the evening. MD Kris Rawlinson achieved some superb performances – from his band [including an excellent string section] and from the acting company. The choreography [Dominique Hammond]was often boldly imaginative.

Sophie Walker was unforgettable as the tragic Wendla, innocent and ill-prepared for the stirrings of adolescent sexuality, with Toland as her free-thinking Melchior, and Bart Lambert as his intense, angst-ridden friend. Their graveside trio was one of the strongest pieces of music theatre I've seen this year.

Among many other memorable interpretations: Laura Messin as Anna, Alice Masters as the bohemian Ilse, and Jess Moore as the abused Martha. A moving alternative awakening saw Ben Huish's Ernst, who dreamed of being a country pastor, duetting with Josh Butcher's Hanschen, though it might have been better to resist the easy laugh. Alex Hilton and Laura Bradley worked hard as all of the adults in this unhappy story.

But this was very much a company performance, with numbers like Totally Fucked and the moving, emotionally charged Purple Summer finale making a strong, lasting impact.
on Thursday, September 20, 2012

wow! What an amazing performance. Everyone ivvolved should be so proud! AMAZING