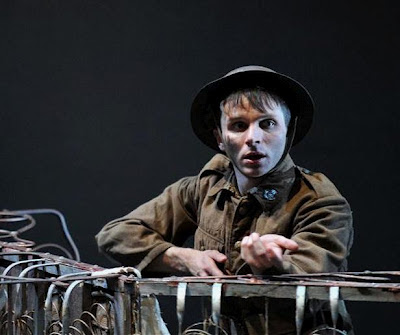 PRIVATE PEACEFUL
The National Theatre and Scamp Theatre
at the Theatre Royal Haymarket
29.09.12

One Man Two Guvnors are now moving back after their two-week holiday. Keeping the theatre alive during that time was the one man version of Michael Morpurgo's book about a young soldier shot at dawn for cowardice in 1916.

It's a story aimed at older children, and it was encouraging to see so many families filling the vast auditorium at the Haymarket. This touring show must have looked very remote from the back of the gallery, but Paul Chequer, who alternated the role with Mark Quartly [pictured], and who played in the Radio 4 adaptation earlier this year, successfully peopled the stage – bare save for a camp bed which doubled as a dug-out – with countless characters from his not-quite-eighteen years of life.

As in the novel, his monologue is punctuated by reference to Captain Wilkie's "wonderful watch" given on the field of battle to Private Thomas Peaceful's brother Charlie, who later bequeaths it to Tommo himself.

It's five past ten, and he has the whole night ahead of him. He'll refer to the watch as dawn approaches, wishing that it would stop and morning never come.

As he waits, he remembers milestones on life's road, from Sunday School to the Somme, with childhood incidents foreshadowing the Great War: his father's death the carnage of battle, the schoolyard the regimentation of the men, the yellow biplane the dogfight over the trenches.

The writing, and Chequer's unaffected delivery, evoke the lost, often bleak, world of Edwardian country childhood, with its woods, streams and puppy love, and the terrors of conflict, with rats, lice and rain. But even in Belgium there are idyllic moments, with Anna from the estaminet and birdsong when the guns fall silent.

The end, when it comes as six o'clock strikes, is as uncompromising as the rest – a brief Miserere and, we imagine, a terse telegram home to Iddesleigh.

The music before the show – uncredited in the programme – was from Coope, Boyes and Simpson, a cappella songs from the folk idiom of the period, first heard in the concert version of the novel with Morpurgo reading extracts. A merchandise opportunity missed – would have been good to see the CD on sale alongside the programme and the playtext.
on Sunday, September 30, 2012