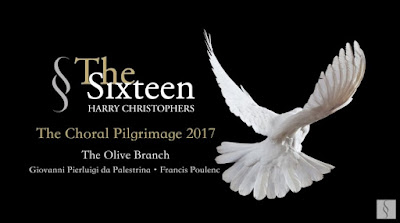 THE OLIVE BRANCH
Harry Christophers and The Sixteen
at Chelmsford Cathedral
25.11.2017

Their seventeenth Choral Pilgrimage, and once again Chelmsford is lucky enough to be on their camino.
The programme this year is a blend of Palestrina and Poulenc, two composers separated by more than 300 years, each writing in a very different musical idiom. But both creators of sacred choral music that is sublime, expressing a deep personal belief.
The bookends were both Salve Reginas – Poulenc’s tender setting to start, in a beautifully balanced, perfectly enunciated performance, and Palestrina’s renaissance masterpiece to end, performed with the polish and commitment familiar from the series of recordings devoted to this composer - “allowing Palestrina to breathe”, as Harry Christophers puts it.
It’s a fruitful combination, providing new perspectives on each of these giants of choral music. But it is the Poulenc that is the real revelation here – the “moine” and the “voyou” in Rostand’s familiar phrase. Although one of the finest things on offer was the secular “Un Soir de Neige”, written during the final Christmas of the war, it was the “moine” who was most in evidence, in the exquisite Agnus Dei [from the Mass in G of 1937], and the Four Motets from a year or so later, excitingly varied in their approach, and beautifully shaped by Christophers, with the silences given due weight.


Another imaginative pairing for the 2018 Pilgrimage – Benjamin Britten and the Tudor composer[s] William Cornish. Sacred and Profane begins its journey on March 14 in St Alban’s. At the time of writing, no sign of Chelmsford on their tour schedule ...
on Monday, November 27, 2017

Email ThisBlogThis!Share to TwitterShare to FacebookShare to Pinterest
Labels: Chelmsford cathedral, THE OLIVE BRANCH, The Sixteen