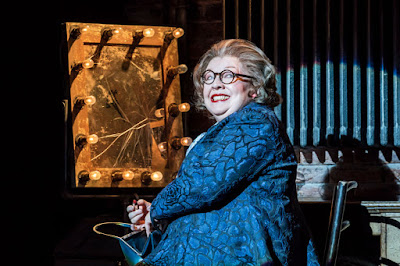 FOLLIES
The National Theatre at the Olivier

The eagerly awaited NT Follies – latest star-studded revival of Sondheim's 1971 masterwork.
It must be almost 40 years ago that I saw what I think was the UK première – a production by students of the University of Southern California, in the cavernous, faded splendour of the auditorium of Portobello Town Hall. 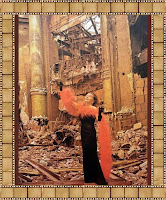 Dominic Cooke's production, with designs by Vicki Mortimer, uses the depth and height of the Olivier stage to recreate the derelict Weismann Follies, inspired perhaps by the iconic photograph of Gloria Swanson in the ruins of the Roxy Theatre, reproduced in the lavish souvenir programme.
The ravages of time are central to his interpretation – the older characters are contrasted with their younger selves, forever walking through conversations or shadowing the movements of half-forgotten numbers. So, as in Merrily We Roll Along, we are reminded of the fate of the glowingly optimistic young things. The young lovers watch from atop the rubble as their older selves reminisce and fight. The showgirls – beautifully dressed – appear like ghosts or angels on the rusty fire-escapes – the closest we get to a walk-down staircase. The 21-strong band [MD Nigel Lilley, in white tie] are glimpsed in the upstage shadows.
The 37 cast members include excellent chorus – Bill Deamer's choreography is wonderfully well served – and some of the best musical theatre performers in the land. Janie Dee is Phyllis, unhappily married to Ben, stylishly sung [not for the first time] by Philip Quast. She flirts passionately with a callow waiter [Jordan Shaw] and gives a near-definitive Could I Leave You, very simply staged. Peter Forbes is Buddy, whose dowdy wife – from Phoenix AZ – is the legendary Imelda Staunton, already Olivier-laurelled for three other Sondheim leading ladies. Her Losing My Mind is unbearably tragic, and she brings the same sad despair to much of her dialogue.
Her younger self is Alex Young; Phyllis's Zizi Strallen.
Superb characters from Di Botcher as the chain-smoking Hattie – Broadway Baby; Tracie Bennett, flaky, heavily mascara'd, gives a manically, despairingly defiant I'm Still Here.
The role of Roscoe is key to setting the tone [with Beautiful Girls] – good to see the excellent Bruce Graham given space to make an impression.
Any Follies production needs a legend or two to underline the nostalgia and the theme of showbiz survival. I fondly recall Pearl Carr and Teddy Johnson in the 1987 Shaftesbury Theatre show. Their dancing double act is nicely done by Norma Atallah and Billy Boyle, whose résumé includes a long list of West End musicals as well as the Basil Brush show. But the real legend here is Dame Josephine Barstow as the operetta star Heidi Schiller. She duets beautifully with her younger self, soprano Alison Langer.
Loveland – and the follies which follow – is suggested by gauze and chandeliers, and a diaphanous front cloth for Buddy's superbly guyed vaudeville routine.
No interval, but the two and a quarter hours didn't seem a moment too long. At the end, we're left with the quartet of youngsters, and a last look back from Gary Raymond's wonderful Weismann as he stands in the doorway.