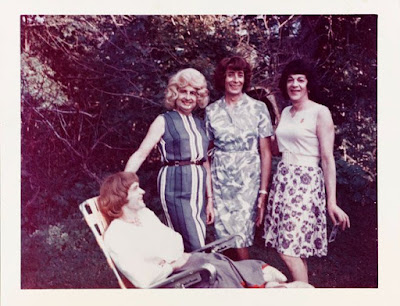 Harvey Fierstein. Kinky Boots, Cage aux Folles, and, surely his finest hour, Torch Song Trilogy, memorably done on this stage back in 2001.
Casa Valentina is a newer piece, though it does revisit those favourite Fierstein themes. Based on the legendary Casa Susanna, it takes us back to the days – the early Sixties – when cross-dressing was still a crime in many US states, and a weekend retreat resort in the Catskills was a dream come true for these “self-made women”. The dream turns to nightmare after the interval, when politics takes over from prosthetics, and callow newbie “Miranda” [an excellent Jesse James Lamb] flees back to the closet.
Rebecca Segeth's production has an evocative period set, on two levels, carefully lit [Jack Hathaway]. And a very strong cast, beautifully turned out in their femme frocks.
Colin Smith is “Valentina”, facing the uncertain future of his guest-house, supported by his wife, the only GG [genuine girl] in residence. This play is the story of their marriage, too, and the final moments are almost unbearably poignant: George sheds his masculine skin to the Everlys' Let It Be Me, as Rita [touchingly played by Rachel Curren] stands confused and alone on the stage above him.
There is much fun and silliness too – the Wildean contributions of the outrageous “Bessie” [Dave Hawkes], and the Sugar Time routine, where the faces of the wallflowers tell their own story: there's Terry Cramphorn's veteran Theodore, who once found refuge in gay bars, listening to Ian Willingham's Michael, who invited the new boy, and whose put-down of “Charlotte” is one of several powerful monologues in the piece - “Bessie”'s uncharacteristically melancholy musings on his marriage are another.
The darker ending is down largely to Barry Taylor's “Charlotte”, a determined activist who will stop at nothing to sign Valentina's guests up to her Sorority. The scene between Taylor and Peter Jeary's Judge (Jeary stepping into “Amy”'s size 10s at a week's notice) is a dramatic masterpiece, and sets the tone for the end of the play, where an icy appearance by the Judge's unsympathetic daughter [Catherine Kenton] reminds us of just how different attitudes were half a century ago.


A superb production of a fascinating piece – a fine note on which to end a successful season for CTW.

image: guests at the original Casa Susanna
on Wednesday, July 26, 2017