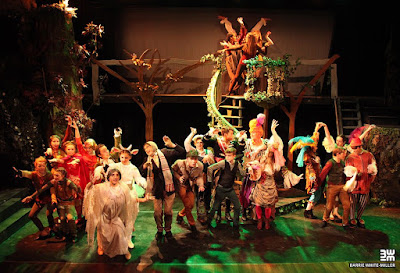 Not an easy ride, Into the Woods. Dark themes [blindness, child sacrifice, sterility] and a tricky, intricate score. The cleverly interwoven fairy stories are cosily familiar, but Sondheim's twist is often harsh and cruel.
But Chelmsford's Young Gen are always up for a challenge, and their intimate Cramphorn production, directed by Jimmy Hooper, brings freshness and vitality to the show.
A triple challenge, in fact. The actors have to bring audibility, clarity and humanity to their roles, and that's before they tackle the intricate rhythms and tangled tunes. Not all the boxes are ticked all the time. The random proverbs have only mixed success. But the overall effect is polished and exuberant, with some cleverly choreographed production numbers, filling the very limited stage space with dancing princes, aides, ugly sisters, goodies, baddies and in-betweens. The music is very well served; Bryan Cass the MD joined in his tiny sylvan nook by Richard and Phil Langstone.
A big cast, with strength in depth, and many memorable performances. The cut-glass narrator is the excellent Sam Wolstenholme, smoking jacket and quizzical eyebrow. The baker and his wife, around whom the fairy-tale quest revolves, are done with experienced aplomb by Jack Martyn and Eve French. Outstanding work from Jessica Higgins as Red Riding Hood, bringing a cheeky characterization to the role, and enjoying a pas de deux with Jack Toland's lairy Wolf. And from Katie Salter as the Witch; her Last Midnight superbly crafted. Paul French makes a nerdy, nice-but-dim Jack, of beanstalk fame. The Agony brothers, Princes to Phoebe Walsh's tuneful Rapunzel and Lois Chapman's assured Cinderella, are engagingly guyed by Matt Barnes and Jack Harlock.
Good to have a human Lyre [Virginia Hampson] and a properly characterized Milky White [bovine resignation from Millie Parsons], actors for the birds and the trees, and even the Baker's table [uncredited, as far as I can see, but surely a shoo-in for best supporting role].
The set is impressive, with a useful upper level and a prominent spiral staircase, converted by brollies into a beanstalk for the giant-killer. Well used too: the exemplary Your Fault ensemble followed by the quartet looking aloft at the Witch for her big solo. Another striking ensemble for No One Is Alone, Sondheim's philosophical summing-up: Witches can be right,/ Giants can be good./ You decide what's right,/ You decide what's good.