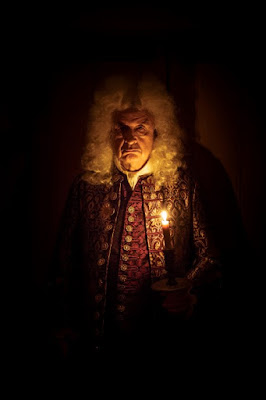 ALL THE ANGELS
Shakespeare's Globe at the Sam Wanamaker Playhouse
28.06.2015


Mr Haendel, naturalised Brit and national treasure, is no stranger to the capital's stages. A prolific writer of smash-hit operas, he's also appeared more recently as himself, notably in the National Theatre's Coram Boy in 2005.
Here, though, he takes centre stage in a beautifully written play with music which looks at the first ever performance of Messiah, in Dublin, in 1742. In a chiaroscuro candlelight that George Frederick would certainly recognise, a small chorus and an even smaller period instrument ensemble provide wonderful extracts from the magnum opus, while three actors bring the trials and tribulations of that difficult premiere to life.
Sean Campion plays not only Crazy Crow, a kind of 18th century roadie moonlighting as a “resurrectionist”, but also Jennen the librettist and Lord Cavendish who encourages Handel to open in the Fishambles Music Hall.
Susannah Cibber, the singing actress who sang second soprano in that first performance, was played by a modern singing actress, Kelly Price, who brought a feisty spark to the part, as well as real pathos in her big number – He Was Despised. She was also a very young Charles Burney, bringing Handel his coffee in Chester
The composer was done as a curmudgeonly perfectionist by David Horovitch, battling with illness, fondly recalling the Water Music, bullying and cajoling his prima donna, and reassuring the chorus that their role is key – they are “all the angels”.
All three performances are brilliantly polished; the piece is a perfect fit for this space, as well as a fascinating, if conjectural, exploration of that first triumphant Messiah and the people who created it.
on Friday, July 03, 2015