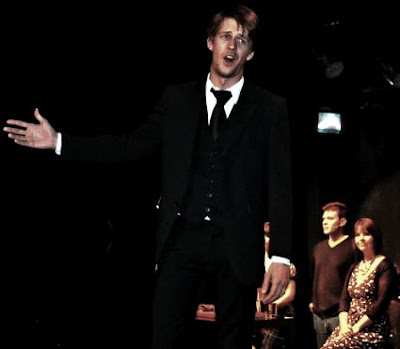 Phone rings, door chimes, in comes Company !
Sondheim's classic concept musical, now over forty years old but still pertinent and edgy, was given an audacious make-over in Emma Jane Sweeney's impressive production for Brentwood Operatic.
A bare black cabaret stage with stools, band behind a gauze, and the amazingly confident performers moving around the auditorium, never missing a beat or a note.
It's bachelor Bobby's 35th birthday, and those “good and crazy people”, his married friends, have organised a surprise party. As ever, he's on the outside looking in, or rather, in this brilliant, bold staging, he's in the middle, and they're all addressing the three sides of the audience. Other clever moments were the karate moves, the umbrella bouquet and the superbly sustained Side by Side sequence.

Samuel Gilmore-Cousins was a decidedly detached Bobby, laid-back and casual; he delivered his big numbers with élan. But there were no passengers among the five couples and three girlfriends in Bobby's life. Space only to mention a brilliant Sarah from Nina Jarram, some great vocals from Abby Lowman, and a perfect performance from Samantha Thompson as the dumb blonde flight attendant who leaves Bobby's bed, bound for Barcelona.
The musical side was just as polished as the dramatic, with a great band under MD Ian Southgate. This score has some of Sondheim's best numbers, and we had slick, professional renditions of the “Crazy” trio, Marry Me a Little, City of Strangers, Being Alive, and of course the title song:
No strings, good times, just chums, company !
on Tuesday, November 08, 2011