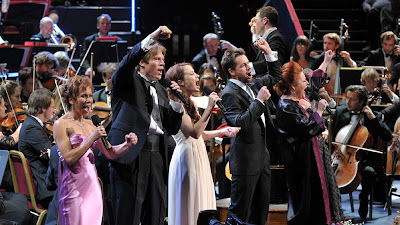 A CELEBRATION OF RODGERS AND HAMMERSTEIN
BBC Prom 49 at the Royal Albert Hall
22.08.10
Since I saw John Wilson's MGM Prom on television last year, I'd been looking forward to his return to the Albert Hall.
And thanks to my colleague from Musical Opinion, I had an excellent ringside seat.
It was an intensely enjoyable hour and three quarters. Wilson's hand-picked band, led by Andrew Haveron, were on sparkling form, and put heart and soul into these movie classics. Yes, these were the Hollywood arrangements we were hearing, written for similarly stellar bands in the 50s and 60s, in Wilson's new performing editions.
The non-stop music began and ended with Oklahoma, the Overture and Main title leading into Julian Ovenden's Oh What A Beautiful Morning. We were impressed by his Sondheim work a couple of weeks ago, and he seemed equally at home in this more innocent world. He was joined by the excellent Sierra Boggess [Christine in Love Never Dies] for a delicious People Will Say We're In Love.
Carousel was equally strong, with its intoxicating Waltz and the touching Soliloquy [Ovenden again] as well as a roof-raising June Is Bustin' Out All Over from Kim Criswell and the Maida Vale Singers, who gave sterling support throughout, including some character work – Nothing Like A Dame, for example, from South Pacific. Anna-Jane Casey and Rod Gilfry were the duettists here, in the twin soliloquies leading into Some Enchanted Evening.
The climax was Climb Every Mountain [Criswell, perhaps lacking the register for the role] but for me Boggess's inhabiting of the Julie Andrews numbers - I Have Confidence and Something Good – best represented the Sound of Music. The women from Maida Vale gave us the most classical piece of the afternoon, an A Cappella anthem; since the RAH organ was pressed into service for Sondheim, I was a little disappointed not to have the Processional for Maria's Wedding ...
No doubt, though, who the star of the show was, with his style and stage presence, complete with tail coat and red towel – for the hot and humid Albert Hall – John Wilson, whose enthusiasm and intuitive understanding of these wonderful scores made this a highlight of this year's Promming.
on Monday, August 23, 2010