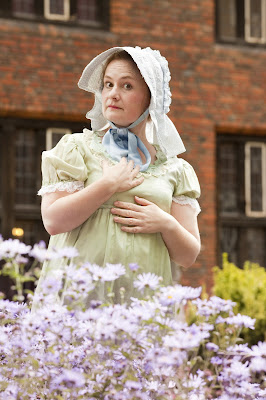 MANSFIELD PARK AND RIDE
Eastern Angles at the Sir John Mills, Ipswich
02.01.10
A thousand ukuleles at the Proms, Jane Austen in Ipswich. Audience participation Odes to Joy are obviously in vogue.
Mansfield Park and Ride – the title explained and exploited in the script – is the 22nd Eastern Angles Christmas show, but the first from the new creative pairing of Brendan Murray [words] and Richard Taylor [music].
Maybe not as gleefully manic as some previous shows, but bigger on local jokes, and even more self-referential. I liked the way Sophie Steer's earnest Lizzie stepped out of character to complain about the poor production values, and I loved the increasingly desperate ruses to get one of the versatile cast to the piano stool for the next song. The show was directed by Eastern Angles' Artistic Director Ivan Cutting, who knows how to keep this sort of nonsense on the boil, and the ingenious wordplay, the groan-worthy gags and the silly singalong meant that the audience needed to be almost as well-trained as the hardworking actor/musicians.
Gatacre Road stalwart Greg Wagland had great fun as the Revd Weakly, Lady Kitty and the dastardly Mr Daly. Vera Chok was Lizzie, Fanny and a believable beggar, while William Belchambers [there's a moniker Jane Austen would have been proud of] pulled off the unlikely double of Lottie, the butchest of the Bonnet girls, and the dishy, dripping wet Captain Knightly.
Sally-Ann Burnett had some of the funniest moments as Mrs Bonnet and Herr Beethoven, whose music was raided for some clever songs.
And how lovely to applaud the drudge Betsy, played by Latchingdon leading light Penny Lamport, now with Newcastle's InterACT ensemble.
2010 will be a big year for Eastern Angles, putting funding crises behind them and expanding their Peterborough operation, as well as a new regional tour and one of their once-a-decade site-specific pieces, Bentwater Roads.
on Tuesday, January 05, 2010