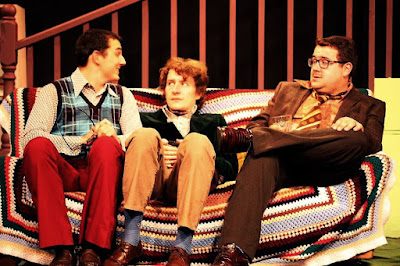 THE UNVARNISHED TRUTH
CTW at the Old Court Theatre
02.10.16


Improbable even by the standards of farce, Royce Ryton's black comedy, first seen in 1978, provides plenty of laughter as the bodies pile up.
It all starts with the hapless playwright – presumably the role Ryton wrote for himself – killing his wife during a marital tiff worthy of Martha and George.
He's played at the Old Court by Jack Shepherd, excellent in his initial hysterics – the phone call to the deaf old locum – and later in his bemused muddling of evidence and plotlines. Two polished farceurs are embroiled in concealing evidence and fabricating alibis: John Mabey as Bert from the nick, wrestling with bodies and an orange beanbag, timing double takes and laugh lines with comic aplomb. And Bruce Thomson, physically very inventive as the literary agent, veering between panic and hauteur.
They are the monsters of Cosy Nook, joined later by Terry Cramphorn's corruptible Inspector, matching the youngsters for comic flair.
The women are all victims, though each has a little character work before conking out. Naomi Phillips as the wife, Annabel, Caroline 'Blom' Brown as the mother-in-law with the directoire knickers, Bev Benham as the eccentric landlady – a little too laid-back for a fascist, perhaps – and Sally Ransom making the most of her equally eccentric friend.
The set evokes the 70s in their eye-watering excess, the costumes are painfully period too. Director Caroline Froy – aided and abetted by Helen Quigley and Laura Hill – achieves a fast-paced, adroitly acted show, with the set pieces deftly delivered.
The audience were most amused, and so was I, despite the uneven nature of the writing and the occasional holes in the plot. A strange piece, a kind of Orton-lite, but still worth a revival forty years on.
on Thursday, November 03, 2016