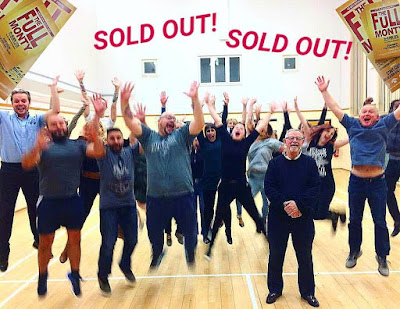 Springers at the Cramphorn Theatre

Could have been another Billy Elliott, or Stepping Out. But Broadway got there first, and smelted Sheffield into Buffalo [in the Danish version they're brewery workers from Copenhagen!].
This is Springers' second Full Monty, and it features some of the same members we saw seven years ago.
The Cramphorn stage is simply dressed with tall white screens – the suicide motor the only projection, I think – with piano to the left, restroom to the right, and Ian Myers' band firmly out of sight.
Confident, compelling performances from Peter Spilling and Simon Brett as Jerry and Dave, the odd couple at the centre of the sentimental tale. Joining them as Hot Metal in the pitiless spotlight at Toni Giordano's are Dominic Light's sensitively played mother's boy Malcolm, Jason Norton's amusingly uptight Harold, Julian Harris's mischievous Horse and Bradley Cole's quietly determined Ethan.
Strong support from Sara Mortimer as Harold's materialistic other half, Sophie Lines as Dave's loyal wife, and Helen Arber as Jerry's acid-tongued ex. The seen-it-all piano player – hip flask and Marlboros – is nicely suggested by Natalie Schultz.
Nathan, Jerry's tug-of-love son, is given a relaxed, realistic performance by Mattie Scott.
The score is far from memorable – Let It Go the one exception – but the numbers are engagingly staged [choreography by Kieran Young] – and all unplugged: the a cappella Scrap, the witty Man duet, and the touching You Rule My World.
A sell-out success for Springers, directed, as in 2009, by Andrew Shepherd. So, despite not being “young, pretty or any good” will they bare their tattoos again in 2023 ? Book now …
on Monday, November 21, 2016