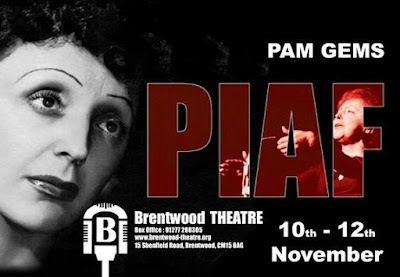 Pam Gems' dramatic biography of the great chanteuse is not a perfect play. Husbands, lovers, protégés go by in a flash, in a confusing sequence of disjointed scenes. In 1978, when many more people remembered The Little Sparrow and her remarkable story, the central performance [by Jane Lapotaire] was widely thought to be much better than the writing.
The same could well be said of this welcome Brentwood revival, directed for Kytes by Graham Poulteney. It is memorable chiefly for the outstanding performance of Tori Till in the title role. Sassy, crude, but vulnerable in her trademark black dress, she held the stage, especially in those moments in the spotlight, recreating the distinctive songs that made her famous. And that unique voice, easily heard over the traffic and the cutlery.
The tone, the timbre were uncannily accurate – a real frisson when a word - “bat”, or “sonne” say – absolutely hit the nostalgia spot. The acoustic Heaven Have Mercy, with live accompaniment on guitar, was touchingly done, and her No Regrets final number had huge emotional power, bringing fans to their feet as it did over half a century ago. And the final scenes, her tragic decline and her deluded determination, were movingly played.
She was well supported by Romy Brooks as her old mucker Toine, their love-hate relationship nicely suggested. Good work too from Wade Owojori in a multitude of roles, including the boxer Cerdan and the singer Montand, and from Gareth Locke as Little Louie and many others. The duologue between Leplée [Bob Thomson] and Coquatrix [Paul Sparrowham] in Act Two was convincingly done.
But this was a disappointingly flawed production. Forgivable perhaps on opening night were some hastily curtailed sound and light cues. None of Piaf's co-stars sang in French on stage. The odd cliché might be excusable too: bicycle, striped tee-shirt, baguette – only the onions missing. And no-one expected faultless French, although a stricter dialogue coach might have eliminated the worst howlers. The announcer, for example, had little to do other than to say, quite frequently, “Mesdames et Messieurs” … ironically the same actor was the American MC who couldn't get Edith's name right. And I don't think Aznavour was ever called Charlotte.
More surprisingly, Piaf was allowed [encouraged? directed?] to use a cod French accent throughout, which made it much more difficult to suggest her roots in the gutter and her emotional depths. Rather like asking Helen Mirren to play the Queen in a plastic mask. Bizarrely, not all the actors ventured down this “Allo Allo” avenue.
But good to be reminded so persuasively of the songs, and of La Môme's eventful life, though I would guess it might be hard to follow without at least some knowledge of her career and the colourful characters who briefly shared it with her.
on Sunday, November 13, 2016