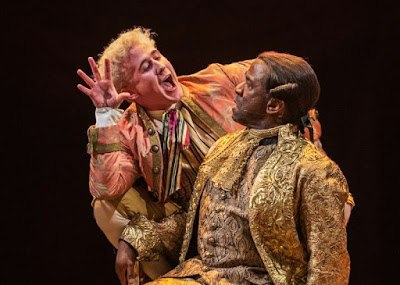 Back in the Olivier to see the eagerly awaited revival of Peter Shaffer's classic Amadeus.
Only a couple of rows from the front of the circle, where I still remember sitting entranced in 1979 as I watched Schofield create the role of Salieri, ironically bringing notoriety to a composer who feared, rightly, that his memory would be eclipsed by Wolfgang Amadeus Mozart.
Michael Longhurst's production is very different, of course. One of its great strengths is the 20-strong South Bank Sinfonia, embedded in the action. They set up at the beginning, and at the end, coats on, instruments in cases, they take a call with the actors. The venticelli are literally winds, carrying their instruments as they bring gossip and comment on the action.
Their modern dress is not the only anachronism – Salieri's sweetmeats look like donuts, and Mozart sports stylish DMs.
He's played by Adam Gillen as a strident, charmless child, accentuating the gulf his rival sees between the sublime and the disgusting prodigy. The “dreadful girl”, his Constanze, is given the full TOWIE treatment by Karia Crome.
Gillen's caricatured shoutiness is occasionally contagious, with screeching and yelling where cold crispness might be more effective.
Antonio Salieri, seeking advancement and fame, bargaining with his God, scheming to thwart the upstart Mozart, is powerfully played by Lucian Msamati. He has a strong rapport with the audience, his ghosts of the future.
The Olivier stage, bustling with life at the court, on the streets, in library and salon, is excellently used, with hangings, two levels, a cloth for the Prater and a pit for the players, who are imaginatively used – a walking glockenspiel especially effective. The music is often played straight, but there are twists, too: hooked-on bass-heavy serenade for the party, smooth jazz for a seduction.
Among the many impressive moments, amusing stagings of Seraglio and Zauberflote, and a stunning climax in which Salieri is crushed by the force of the Kyrie, and he clutches vainly at the Mozart manuscripts on the floor around him.
production photograph: Marc Brenner
on Tuesday, November 08, 2016