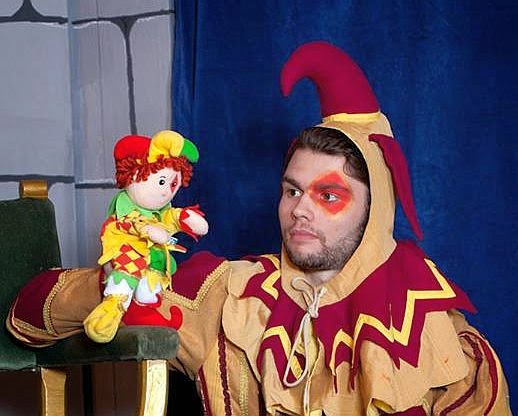 This must be one of the most theatrical of the Discworld canon, with its delicious mix of Shakespeare and pantomime.
So a fitting choice for CTW, in what has become a tribute to Pratchett, who died as rehearsals were beginning.
We meet all the familiar characters: Granny Weatherwax and Nanny Ogg, played with a fine comedy chemistry by Christine Davidson [who's been here before] and Sara Galvin.
Their New Age apprentice, Magrat Garlick, is played with naïve charm by Helena Bumpus. In this tale, she falls, understandably, for the youthful allure of Verence the Fool – seventeen years under the bladder - engagingly portrayed by Theo Perry, with his motley, his bells and his MiniMe poppet.
Duke Felmet and his ambitious wife, warped refugees from the Scottish play are Terry Cramphorn, forever trying to get the blood off his hands, with increasingly caustic solutions, and Andrea Dalton, in a strong performance redolent of Tenniel's Duchess. Making his CTW début, Ian Russell, turning the histrionics up to 11 in the dual role of the old king's spectre and the scenery-chewing actor-manager – somewhere between Vincent Crummles and the Player King - of the Dysk Theatre on the Ankh river.
A large supporting cast of peasants and players, in assorted Tudor clobber, including Alex Phillips as Tomjon the rightful heir, Caroline Froy as Mrs Vitoller, and David Johnson as Hwel the bard, author of Please Yourself and of the conscience-catching not-the-Mousetrap.
CTW's production, directed by Mark Preston and Sally Ransom, deploys its best lighting effect right at the start, on the blasted heath – the soundscape here, and elsewhere, very effective. The set is open and flexible, with fold-out detail for, amongst other things, the copper for Iain Holding-Sutton's foul fiend. 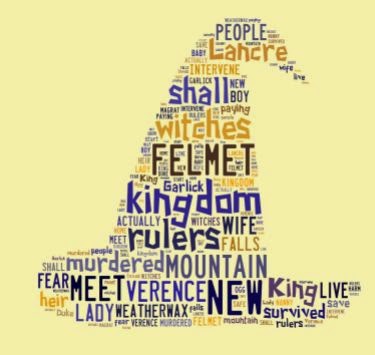 Good to see some new faces, some shameless fun, and a curtain call for Sir Terry at the end.

thanks to the directors and the Wyrd Sisters company for allowing me a sneak preview in a very busy week ...

As a huge Pratchett fan, this show was a bit of a disappointment, to be honest. There were loads of laughs, but the lighting was not good, the staging was sometimes amateurish. Some of actors didnt seem to know the difference between acting and performing. I reckon the show could be done a lot better.