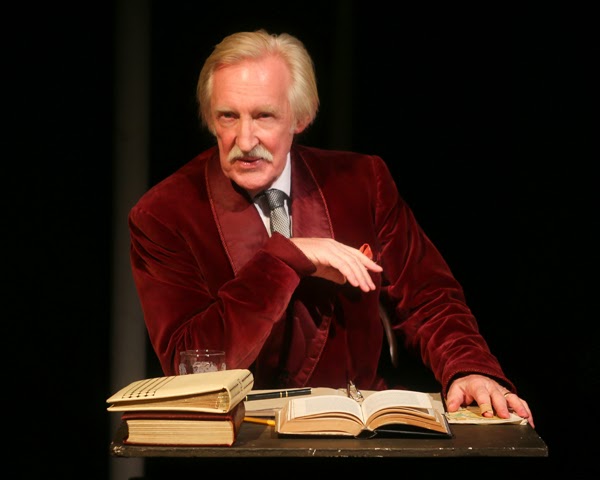 Stoppard has been muttering recently about having to dumb down his latest play to help the audience understand it.
Lucky it's only Philosophy of Mind this time – forty years ago, in Travesties, the punters needed a working knowledge, inter alia, of James Joyce, the Savoy Operas, Lenin's role in the Bolshevik revolution, Wilde's Importance, the poetry of Dada and Gallagher and Shean from the Music Hall.

I think we coped well on the first night. True, we didn't guffaw at the Post Hock pun; even the aleatorily obscene Sonnet 18 failed to raise much of a titter.

But this unlikely tale of expats in 1917 Switzerland kept us entertained for a couple of intellectually stimulating and frequently hilarious hours.

The set [Michael Bettell], with its twin doors and tasteful dove grey/old rose décor, comfortably housed the public library, the drawing room, and a modest escritoire for Carr of the Consulate as he re-drafted his fallible memoir of the Zurich he knew.

That marathon role was shared by Bob Hough as the elderly autobiographer – just the right tone, just gaga enough – and Dom Ward, excellent as the sartorially impeccable young fop. His delivery of the Wildean wit was pin-sharp, his debate about art and flying [with Alan Madrell's equally assured Tzara] was a high point of the production. Sean McMullan brought energy and a polished accent to the role of James Joyce, while Adrian Calvo-Valderrama was an imposing Lenin, a compelling orator.
A strong supporting cast included Lisa Castle's superb Cecily [the simultaneous translation a particular delight], Sacha Walker's sympathetic Mrs Lenin, Camilla Fox's Gwendolen, and Robert Irvine's unbending Bennett, walking forward to lecture us on Russian politics as Henry scoffed cucumber sandwiches on the chaise longue.
The time-slips, a crucial part of Stoppard's vision, were here done by the older Carr scratching out, or tearing up, one draft after another of his reminiscences.
The piece is stuffed with allusions and throwaway gags. “I'm finding this conversation hard to follow,” was a sentiment shared by many, I guess. “It may be nonsense, but at least it's clever nonsense,” the only possible reply.