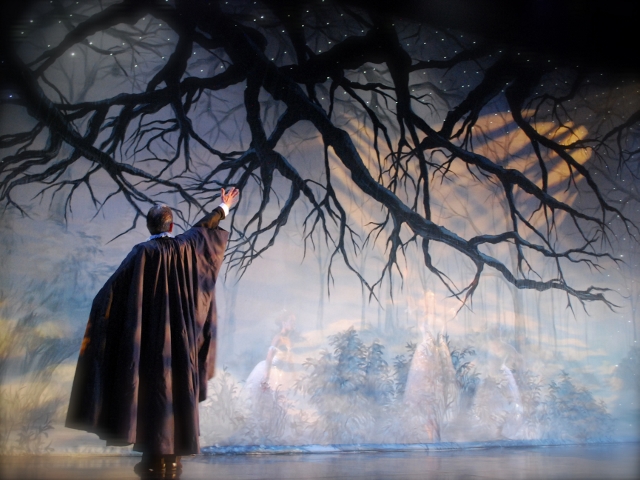 THE NUTCRACKER
Chelmsford Ballet Company at the Civic Theatre, Chelmsford
20.03 2014


This most popular of classical ballets was a spectacular triumph for Chelmsford Ballet.
The traditional choreography, ingeniously adapted to the strengths of the company by Artistic Director Annette Potter, was danced with style and enthusiasm. The crowded stage, for the ball or the battle, a reminder of just how much talent is involved.
And not just teenage balletomanes – the character roles were done with relish by, amongst others, Chairman Marion Pettet as the stately Stahlbaum hostess, partnered by David Yetton, and Stan Rose and Elizabeth Baker as the grandparents, Stan drunkenly dancing till he dropped, to be helped off with a bath chair and a magic cane supplied by Drosselmeyer – a rock solid central performance from Andrew Potter.
There were three guest artistes – the excellent Emma Lister to give the Sugar Plum solo and a breathtaking pas de deux with Richard Bermange's Cavalier. And Michael Budd as a strong, scary Mouse King – his mice minions pitted against the half-masked Nutcracker and his corps of clones.
The title role was danced with considerable presence by Morgan Wren, who also gave us a charming Fritz and one of the principal clockwork Chinese in the Kingdom of the Sweets, partnered by Beth Oliver. The Divertissement gave opportunities to a myriad of accomplished young dancers, including whirling Russians and three pink-clad Mirlitons with their pill-box hats. In Act One, the gift-wrapped Pierrot dolls were elegantly danced by Jessica Wilson and Jasmine Bailey.
The hugely demanding role of Clara was beautifully danced, and acted, by Amelia Wallis, the expressive pas-de-deux with Drosselmeyer one of many magical moments.


The lighting [Andy Chafer], the scene cloths and the costumes [Ann Starling] added to the very professional feel of the production. This enterprising, ambitious company will have gained many more admirers this week, I'm sure.

In its 65th year Chelmsford Ballet Company which is an amateur, not for profit organisation that "sets professional standards for all its work" chose the ever popular Nutcracker set to Tchaikovsky's wonderfully evocative music for its 2014 public production.
That this choice, choreographed and reworked to include the strengths of all dancing members by Annette Potter, was a good one was confirmed by a highly enthusiastic, packed Civic  crowd. Audience members included professional dancer Christopher Marney, creator of the role of the Lilac Fairy in the ground breaking New Adventures Sleeping Beauty, who is patron of this company and associate choreographer to the world famous, much admired Matthew Bourne.
The magical aspects of the Nutcracker began with the opening moments when Andrew Potter's imperious Herr Drosselmeyer set the story running at a Christmas party for Amelia Wallis's heroine Clare's parents and friends including Elizabeth Baker's nimble Grandmother and Stan Rose's giddy, knockabout performance as Grandfather.
It was interesting to see as the ballet progressed that this strong, calm and demure Clara showed signs of the woman she would grow into when dancing with Drosselmeyer. There were seemingly battalions of Morgan Wren's Nutcracker masked soldiers and Michael Budd's Mouse King's warrior mice. All of them very smartly uniformed.
The real magic began with the visit to the Magical Forest when the costume making team's diaphanous Sylphide-style crystal white dresses for the Snowflakes with their glittering embellishments and tiaras.
And then on to Act 2 which showcases choreography and dancing for the sheer joy of it. When the performers can enjoy themselves showing off to their audience and each other. The showy highlight here of course is the technical work of the dazzling Sugar Plum Fairy (a strong, regal Emma Lister) well partnered by her very reliable Cavalier Richard Bermange.
Then along came three scrumptious Mirlitons in bonbon pink; two Spanish dancers flaunting their frilled dresses; five sinuous Arabian dancers; a troupe of lively Russian Dancers; ten Chinese Dancers bouncing to the rhythm of the music; and the swaying, irresistible Waltz of the Flowers.
This was an enormously entertaining production and the lengthy applause at the curtain proved that it wasn't just me enthusing about it. The audience adored it!
Look forward to next year's Pineapple Poll and a new work created by Christopher Marney. Make sure it's in your diary now.
on Friday, March 21, 2014