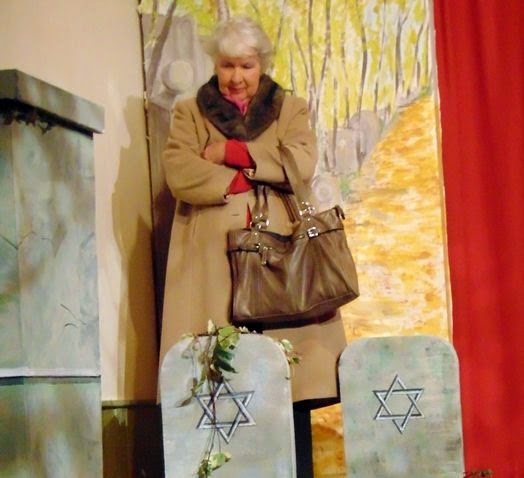 September Song on the soundtrack, and for Little Waltham's trademark proscenium pictures, a vaguely impressionist pair of cemetery gates in the fall [Liz Willsher].
Mags Simmonds' enjoyable production of this favourite five-hander has heart-warming performances from the three widows, united in convivial mourning for their menfolk.
What are “the boys” doing now, they wonder as they sip their tea. Cue for a heavenly spin-off there, maybe ?
Ida, the home body in whose bijou apartment they meet, is played with emotional subtlety and throwaway comic timing by Linda Burrow. She's joined by Vicky Weavers' glamorous Lucille, in her thrift-shop mink with matching muff, and Helen Langley's Doris, still missing Abe after four years. They all have a good feel for the wise-cracking, world-weary Jewish comedy, and the pace is lively despite some interventions from prompt corner.
Witty, warm and often touchingly insightful, the show has some wonderful moments, from the broadly comic Cha Cha Cha to the subtly poignant – poor, confused Ida as she turns out the lights.
The cast is completed by Brian Corrie as Katz, the butcher who delivers, and Sally Lever as the flamboyant, flirtatious Mildred – looking as if she could give Lucille a run for her money …
on Saturday, April 25, 2015