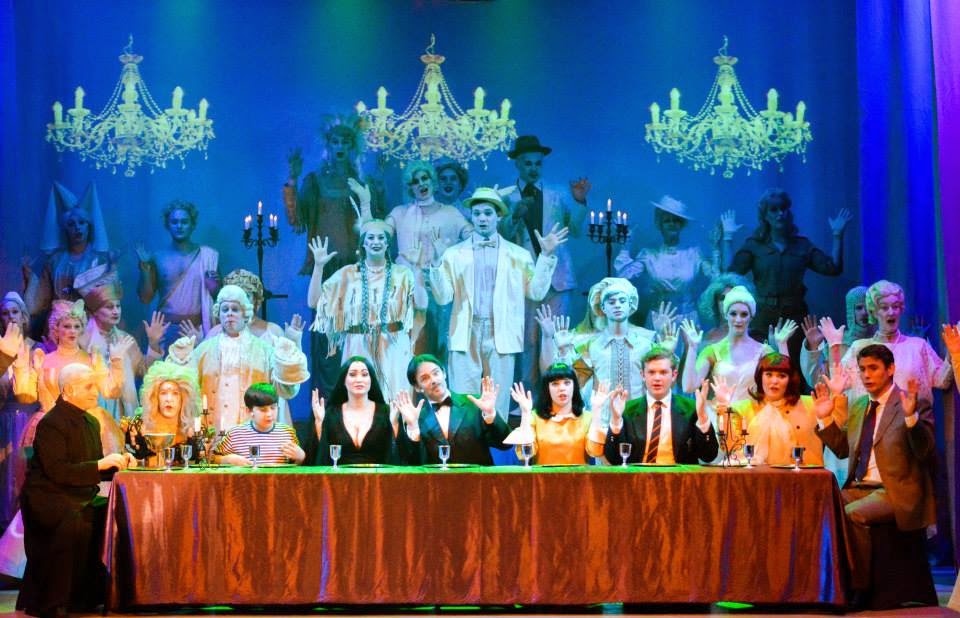 Cartoon strip, black and white tv show, a popular, if not critical, success on Broadway, and the West End planned for next year.
This wonderfully weird family is busy in Essex just now, with WAOS this week, and LODS [at the Palace Westcliff] next.
The Witham show looks great, with projected backdrops and some stunning stage pictures. The living dead, the assorted ancestral Addamses from history, are pallid and wraith-like, with creative costumes in shades of beige and grey.
Against them, the harsher black and white of the present-day family, and the tasteful leisure-wear of their inlaws-to-be, the Beinekes from Ohio.
Some excellent performances in both camps. Corrina Wilson is priceless as Mrs Beineke: whining voice, powerful soprano and a spectacular “Waiting” after her chalice has been spiked. Stewart Adkins, as Gomez Addams, bears the brunt of the show, ably keeping the comedy coming and delivering some brilliant numbers; Constance Lawton his classy Morticia. The rest of the clan have varying success with the very special style this show demands – Edward Groombridge gives a splendid Grandma, and Fraser McLaughlan shows presence and polish as Pugsley. Trevor Marks has his moments as the moonstruck Fester, though the role demands a little more, perhaps.
The star-crossed lovers are engagingly portrayed by Ashton Reed and Ed Tunningley.
Nikki Mundell-Poole's energetic production is imaginatively staged – the supper-table “Full Disclosure”, jazz hands and enthusiasm from the ensemble, “Death Is Just Around The Corner”, the trees in Central Park, the “Secrets” dance routine, the chorus in “One Normal Night”.
All in the worst possible taste. The lyrics frequently sound feeble, the book is patchy, though there are some winning lines: “... makes Mary Poppins sound like Medea./I'm not getting your references./ Well quit the texting and pick up a book for once!”.
The music, though rarely memorable, is serviceable in many genres, and is well served by the company under Musical Director Geoff Osborne.
Always good to see a new musical, even if the characters are familiar. And Witham certainly pull out all the stops to sell the show. But I'm not sure I shall be queuing outside the St James's next year …