WOLF HALL / BRING UP THE BODIES 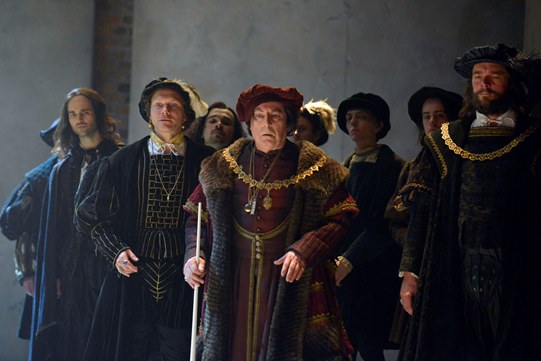 WOLF HALL / BRING UP THE BODIES

This stunningly successful stage version of the Hilary Mantel novels has just played its last performances in the intimate Swan.
I'm glad I finally got to see it there – the modest thrust stage and the wrap-around seating seem ideally suited to the subject and the swift-paced dramatisation. But it's excellent news that it will be taking up residency at the Aldwych, including the original Cromwell and the original King, amongst others.

Devotees of Shakespeare's Globe will find much that is familiar, and not just familiar faces like John Ramm [Thomas More, Henry Norris] and Joshua James, an excellent Rafe Sadler. The first play starts with a sort of jig, with all those Tudor faces crowding the stage. And director Jeremy Herrin is no stranger to Bankside – Much Ado and The Tempest among his recent successes.
His Wolf Hall turns out quite witty and light-hearted, all things considered. Paul Jesson's superbly worldly Wolsey has an inexhaustible store of bons mots - “do they have lemons in Yorkshire ?”, and there's lightness of touch in the Cromwell household too. Tragedy is never far away, though, and the death of Lizzie, Cromwell's wife, is done with a masterly simplicity.
The wily fixer, the skilled arranger, later Master Secretary, is compelling played by Ben Miles. As in the book, though probably not in life, he is often likeable, his common roots making him a sympathetic character.
His King, a man with passions, fears and dreams as other men have, is commandingly played by Nathaniel Parker, with a hint of that heroic actorly voice that idols like Richard Todd used to have.
Two other memorable performances – Pierro Niel Mee's irrepressible servant Christophe, and Nicholas Day's outspoken Norfolk. But all the characters are given recognizable personalities; there are many delights, and much doubling, further down the cast list.

The staging is commendably simple – a row of flames to suggest a winter interior – but often spectacularly effective – the barge carrying the fallen Cardinal along the Thames, echoed in the second play by another barge carrying Anne Boleyn [a lively, feisty Lydia Leonard] … Two key characters are tellingly glimpsed throughout – Joey Batey's Mark Smeaton with his lute and Jane Seymour, played at the end of the run by Madeleine Hyland.
There's a dark, ominous ending to Wolf Hall, a mood which characterizes much of Bring Up The Bodies, which begins with the Hunt, and young men blooded. The king's jousting accident is strongly, very swiftly, depicted, and there are significant contributions from the afterlife. The fateful testimonies against Anne are played out in front of the witnesses; Anne's end has a heart-rendingly tender flashback at its heart.

Mike Poulton, who took on the seemingly impossible task of bringing these massive novels to the stage, says that it was like dismantling a Rolls-Royce and reassembling the parts to make a light aircraft. It is certainly fast-paced, and carries the audience along with it, whether they have read the novels or not.

It would be good to think that these two masterpieces might one day return to the Swan – maybe as a trilogy with The Mirror And The Light ...
on Saturday, March 29, 2014