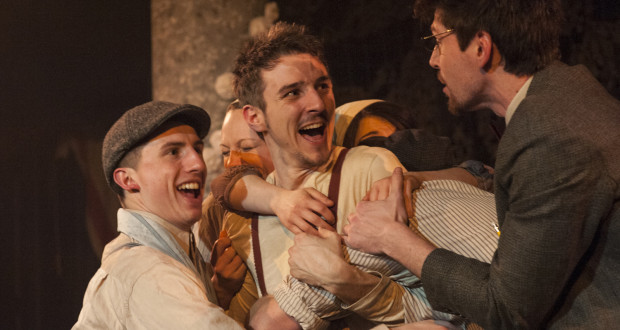 Why can Colchester's theatre attract leading touring outfit Cheek By Jowl – their superb 'Tis Pity last month – and we in Chelmsford make do with this humdrum Midsummer Night's Dream from an unknown company ?

Immersion looked a little out of their element on the wide Civic stage, especially at the beginning, when there were some problems with audibility, too. It seems to have been much more at home in the 50-seater Brockley Jack.

That said, the smallish audience found the comedy to their taste, and the hard-working cast of nine included some amusing characters: James Clifford's irrepressible luvvie Bottom, the despair of his pretentious director, played by Rob Taylor-Hastings. The rest of the rude mechanicals made a good job of their comic tragedy – a squeaky-voiced Lion, a timid Moonshine.

The lovers, often tedious, were given some spirited sparring, encouraged by Ella Garland's enjoyably mischievous merry wanderer. And Nicola Dalziel spoke the verse with some style as Hippolyta and Titania.

This production – pared down to two hours, and allegedly set just before the Great War – was directed by James Tobias and Amy Gunn. It is in fact one of two versions they are touring. The other – the Nightmare – is apparently much darker. Fascinating to see both, of course, though few venues seem to have programmed this option, the Mumford in Cambridge an honourable exception.

and for The Public Reviews:

In a lifetime of Dreams, some stand out, subtitled like episodes of Friends.
The one with the pyjamas, the one set in World War II, the one evoking Hollywood's early years, the [operatic] one in an austere boys' school, the one lasting a bare twenty minutes …

This one is trailed as “set in Great Britain just before the start of the Great War … a time of unparalleled peace and prosperity”. Conjuring up a vision of Edwardian sunshine, a picnic with a gramophone, the lost generation obliviously partying … None of this, alas, in Immersion's tentative staging. Hard to date the costumes – the men's suits at the start look very modern, with Lysander, perhaps in anticipation of his nuptials, sporting morning dress. The set, with classical columns and a gauzy bower for Titania, gives few clues. And the music, though effective at enhancing a mood, is non-specific.

There are some good lighting effects – Puck the enchanter – but often key characters are stranded in darkness. The performances struggle to engage the audience, especially at the beginning.
Things look up when the Rude Mechanicals – stripped of their trades – come on, with jolly music and warm lighting.

And the evening includes some enjoyable characterizations. Rob Taylor-Hastings – an unfeasibly youthful Egeus – is amusing as the self-important Director Quince [though he makes a mess of his Prologue], impatient with his actors, joining the court in the audience, and then getting stuck in to save the day. All the time trying to repress his leading man, a wiry, pretentious Thesp – James Clifford's cat-tearing Bottom. As well as Hermia, Kristy Bruce gives us a nicely nervous Starveling, Moonshine in the play.

Ella Garland makes a nice adolescent Puck, especially good when bewitching the hempen homespuns, and in her final speech.
The verse-speaking is very patchy, with syllables maddeningly added or subtracted – the text itself is severely pruned to fit into two hours, interval included. Nicola Dalziel's Titania perhaps the most successful with the poetry – clear and stylish.

James Tobias's production has many strong moments – the fights especially, and of course Pyramus and Thisbe, much enjoyed by the rather sparse Civic audience. But it lacks a coherent style to carry it through, and seems a little lost on this wide stage – it would appear that most of their work is done in much more intimate venues.

The bare cast list gives no information at all about the company, or these nine actors. So we know nothing about where these voices were trained, or whether their work embraces Casualty as well as the classics, summer seasons as well as Shakespeare.

Nor does it mention the most intriguing aspect of this production. It is one of a pair – there exists also a darker, nightmare version, set a few years later during the 14-18 War, “where, in the dead of night, the dark, dangerous woods become the playground to the mourning spirits of those who have fallen before their time...” It would be good to have the chance to compare and contrast.