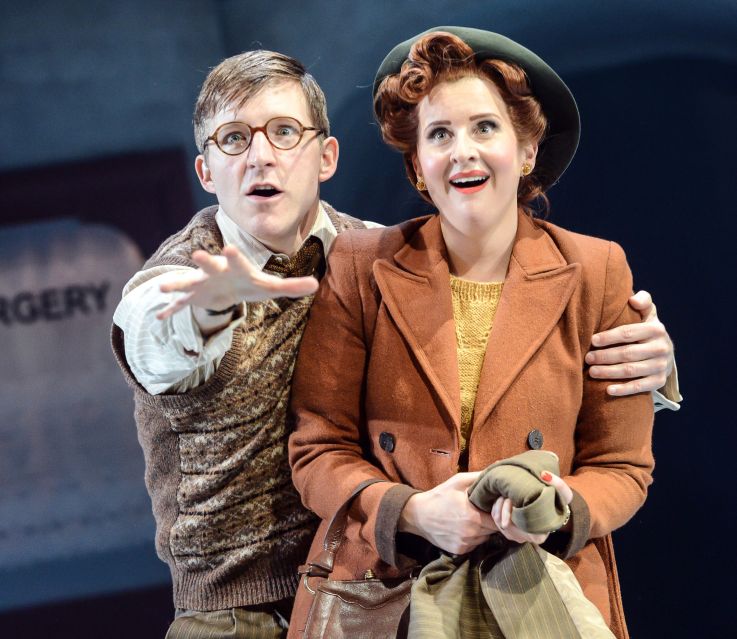 BETTY BLUE EYES
Made in Colchester at the Mercury Theatre
19.03.2014


Not since Babe has there been such a winsome pig to tug at the heart-strings.
Betty is the clandestine hog roast on the hoof in Alan Bennett's film A Private Function, now, thirty years on, setting out on an ambitious tour of the UK as Betty Blue Eyes.
No animatronics here, but a charming puppet, with a permanently puzzled, trusting expression and a lovely land-girl handler [Lauren Logan].
The Yorkshire humans whose lives are touched by the eponymous pig are led by the show's stars, Hadyn Oakley as mild-mannered chiropodist Gilbert Chilvers and his Lady Macbeth, Amy Booth-Steel. Both giving bold but nuanced musical comedy performances, with impressive vocal work – A Place on the Parade, for example.
But as is often the case with musicals, it is the supporting roles that have the most fun. Kit Benjamin, exactly capturing the period style in his florid villain Dr Swaby. Sally Mates as Mother Dear – a real treat, this: her histrionic reaction to a perceived death threat, emoting on the staircase whilst taming a wayward door [one of several technical gremlins plaguing this press night] amongst many memorable moments. And Tobias Beer's demoniacal Government Inspector, brandishing his green paintbrush. Beer manages to make his numbers sound like Sondheim or Weill, no mean achievement. Elsewhere the score is more like standard-issue Bricusse, and fares best in those numbers which are staged with a clear sense of style [choreography by Andrew Wright] – the Morris-men hankies and the DofE Maypole, the pissoir Since The War, the knives and forks for the Mock Pork, the baskets for the ration-book housewives, the chorus in hairnets and trilbys for Joyce's fantasy, the splendid curtain call with the pink wellies, the blitz ballroom flash-back [stunningly agile jiving] and the gloriously operatic Pig/No Pig.
It's always a joy to see actor/musicians, and the occasional appearance of a solo violin reminds us of the piece's Bennett roots, that and the Leeds butchers and the wry one-liners which survive from the original script.
Daniel Buckroyd's inventive, economical production is set on a utility-grey set [designed by Sara Perks]: loads of doors and an ingenious fold-out parlour. The show is lovingly staged, with a fine sense of period.
Occasionally, in the longer vocal numbers, one might muse on how much the music actually adds to the drama and the comedy, but it's impossible not to warm to this poignant pig-tale of austerity and ingenuity in those dark postwar days.