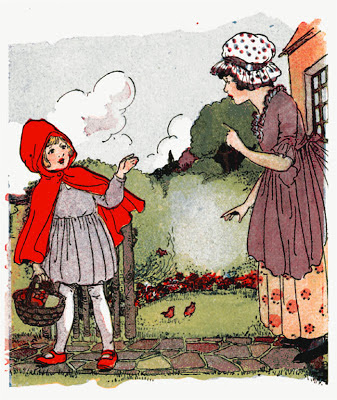 The last panto in the shop, and an unusual one, by Richard Hills, set in the Tyrol, but still including all those favourite moments: the "behind you" routine, the audience song, the good fairy and the wedding walk-down.
So we booed the baddies – secret policemen as well as the excellent Horrible Hilda, Witch of the Woods, of Charlotte Dack – guarded Idle Jack's basket and Fairy Twinkle's pot, sang possibly the shortest ever panto song, and were rewarded with the traditional shower of sweets.
Some lovely performances this year, from the tiniest [Abbi Flack's charming Twinkle and Harvey Cooper's winsome Wolf] to the most experienced [Jessica Moore's likeable Idle Jack with Nicola Mori as his Liesl]. Lots of comedy, especially from the formidable duo of Ella Cooper and Rachel Head as Gerty and her Count. The title role – Maria, in this version – was engagingly played by Jessica Bailey, and her Prince was confidently done by Conor Hicks, last year's Buttons, who had a no-nonsense way of wooing his love, and knew how to handle a show-stopping song, too.
The music was purloined from all over the place: shows from Scrooge to South Pacific, artists from Nat King Cole to the Temptations. The Musical Director was James Tovey, and the show was produced and directed by Peter Ellis, with sets designed and painted by Adam Delf.
on Friday, February 22, 2013