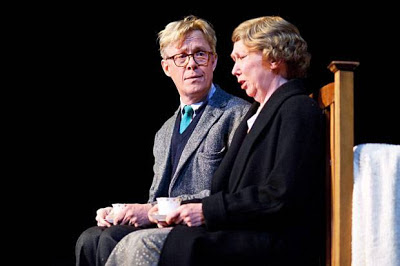 HYMN and
COCKTAIL STICKS
at the National Theatre
10.02.13

Recycling and revisiting are a familiar feature of Alan Bennett's considerable oeuvre. But in this double bill, hailed by some as one of his finest offerings, there is really little that is new.

Hymn was written for Bennett himself and the Medici Quartet. His long-time musical collaborator George Fenton provided the score, based on a nostalgic mix of hymn tunes and the palm court.

Now it's done as more of a performance than a reading, with Alex Jennings uncannily impersonating the author, with his blond hair, his specs and slightly awkward body language, and four young women from the Southbank Sinfonia playing on stage. The setting has dustsheets and bags swathing the country house room, the set for People, for which these plays are normally a curtain raiser. There's a comfy chair, with a wireless set beside it, a cup of tea, and a large window stage right, which towards the end floods the stage with a golden light as Bennett recalls a visit to a rood loft church.

Because this is a live performance to a converted audience, the gentle humour is rewarded with appreciative laughter. It is a wonderfully rich recollection – concerts in Leeds, his violinist butcher father, whose disappointment is one of the most touching moments, and, appropriately for this 30' first part of the double bill, Sunday Half Hour.

As Bennett points out at the outset, his [and mine] is the generation which knows the words to Hymns Ancient and Modern, so it was disconcerting to hear [and see, since this show was captioned] Praise to the Holiest in the Height misquoted.

After an extended interval, Cocktail Sticks. The same set is now cluttered with the bric-a-brac of the family home in Leeds. Here's the scales from the butcher's shop, and here's the Proustian kitchen cupboard with the cocktail sticks at the back.
This is a dramatised reworking of material from Bennett's best-selling memoirs, "edited and augmented". Sympathetically directed by Nicholas Hytner, with gentle underscoring from clarinet and cello, it is a warm, funny and often moving look back: the other boy he would have like to have been, the ideal family he would have liked to have had, a rare moment of happiness in 1952, the eternal embarrassment of family life.

The cast use the hatstands for quick changes. Mam [Gabrielle Lloyd] and Dad [Jeff Rawle] are brought directly to the stage for the first time. "By – I've given you some script!" Mam chuckles, and so she has. Thora Hird and Pat Routledge, Doris and Vera, and now as herself, eventually succumbing to memory loss and what Samuel Beckett [himself getting a name check from J B Priestley] calls "divine aphasia". Dad is brilliantly brought to life, even in death, by Rawle, who also gives us a delicious Neville Coghill, seen here enjoying a joke with Russell Harty's "common" parents.

There's a satisfying structure to what could have been unwieldy material – Mam asks at the end "Did you find your childhood?" before joining Dad who's been waiting in the afterlife for 21 years. It's a cliché, and more than a little sentimental, but it packs an enormous emotional punch after all that has gone before.

And in a surprising coda, Bennett himself has a brush with death, and is treated to an intravenous cocktail of his own. But he's still here fifteen years on, and, through Jennings, cheerily exhorts us to Take Heart !

This double bill - rebadged as Untold Stories - played a limited season at the Duchess. 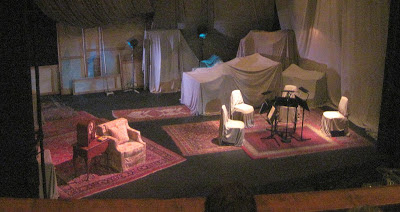 From our dress circle upgrade, more delightful detail: the Hornsea pottery, Bennett, like History Boy's Posner, writing it all down, the actors at the opening of Cocktail Sticks sitting amongst the furniture and effects - we still see echoes of People over the river - for all the world as if they were waiting nervously for the removal men. Auntie Kathleen in Manfield's owed even more to Patricia Routledge, Gabrielle Lloyd's Mam seemed even more moving, as she ages and declines, dying adrift and alone on the double bed.