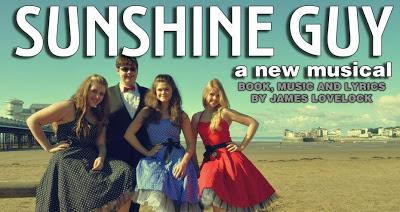 SUNSHINE GUY
GMTG and Watch This at the Landor, Clapham
13.02.12

Kicking off the Landor's From Page To Stage season of new musicals, Sunshine Guy, with book lyrics and music by James Lovelock, who also directs. Down from Birmingham for one night only, in the unplugged intimacy of the room over the pub.

The story, with its time shifts and its love triangles, is a strong, if sentimental, one; the songs are serviceable and certainly evocative of the Sixties. The dialogue is sometimes clunky, though, and the momentum tends to drop when there's no song, no dance.

The setting is simple, with a bench and a café table. No show is complete without haze these days, and here it is supplied by the sweet-scented [herbal?] cigarettes smoked by several actors.

We are in Bognor, where Doug [Callum Orkney] has brought his wife [the excellent Charlie Reilly] on a nostalgic return journey – it's where they got engaged back in '67 – but for him it re-ignites old regrets, and he thinks fondly of young Ben [a beautiful Ross Bennett], a promiscuous gay youth, given to casual cruising under the pier. In a not entirely unpredictable twist, it turns out that the surly, philosophical owner of Café Lewis [impressively played by Leo West] remembers those heady days too …
In the twenty-first century, Doug encounters a young lad, Ashley [Ellis Tucker], who's trying to come to terms with his feelings for his best mate Jamie [Thomas Geggus], not helped by his homophobic girlfriend [a sharp performance from Ciara Cohen-Ennis.]

Though I wasn't impressed by the crude ageist caricatures of the pensioners in the condiment caff, the chorus work generally is impressive, especially in this confined space, with the individuals moving and reacting in character. They sing well too, with countless cheesy key-changes and some thrilling descants from Mike Howe, who also fronts the Sunshine Girls as Sammy Sparkle.

None of the numbers has stayed with me, but at the time I enjoyed Sunshine Guy, Moving On, Cigarettes and Ice Cream and the wistful Boy by the Bay.

There's a brutal climax, but a cautiously happy end for all, even the lonely older Ben, whose baby brother Bobby [Edward Sainsbury] returns from the grave to repeat his reassurance -"You'll find someone …". "I know." is the Eeyorish rejoinder.

Not a perfect piece, by any means, but I'd watch this any day rather than another juke box musical. And huge respect and admiration for the determination and enthusiasm that got the show on in the first place, and then brought it all the way to the Landor.