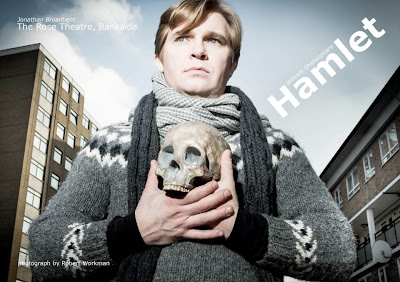 The shot glasses are lined up, Claudius cuts the cards and it's a deadpan duel to the death between Laertes and Prince Hamlet, with Yorick's skull and the tinny transistor on the table as a memento mori.

Martin Parr's amazing one-act Hamlet makes ingenious use of the space at the Rose, Bankside. To begin, we are in a dark, confined space, but as Claudius realises he's been set up, and calls for lights, the veil of the temple is swept aside to reveal the vast archaeology beyond, Ophelia's brook and the Gravemaker's domain in the distance, lit by handheld electric torches.

There are several other inspired innovations. It is amazingly powerful to have the troubled Prince of Denmark sitting amongst us, sharing his thoughts in a movingly natural way, and involving all fifty of us – fellow students, travelling players – in the action. And the transistor radio ? It's the public voice of Claudius – the King's Speech, complete with Beethoven – it's the private urgings of Hamlet's father – the ghost a famous Prince of Denmark from the turn of the millennium, I'd swear. And at the close – "the rest is silence" – static and a flat-line tone …

Only four actors, but all of them excellent. Jonathan Broadbent is the up-close and personal Prince, who could easily fit in to the Faculty of Philosophy in Wittenberg, beautifully spoken, hardly seeming to project at all, but with a terrific presence. His mother, and his Ophelia, is Suzanne Marie, strong in both roles, knitting a long red scarf which unravels as Ophelia runs mad. Scarves something of a feature – Hamlet could do it pat with his, garotting the kneeling King, played with an icy determination by Liam McKenna, who with the addition of a pair of specs becomes old Polonius. Laertes, the Gravedigger and a nerdy Rosencrantz are all played with disarming honesty by Jamie Sheasby.

Rebecca Brower's design, with more than a nod to Nordic Noir, uses trails of red rope lights – Polonius's guts, Ophelia's garland – to startling effect, in contrast to the chilly gloom of the interiors with utility metal lampshades casting ominous pools of light.

Pocket Hamlet is not new, of course. Stoppard famously cut it to fifteen minutes. The Globe's tour last year was little over two hours with eight actors. But this taut, intimate production from Parr, who gave us Romeo and Juliet in the same space last year, gives a reading of the play which stands comparison with any other – no allowances need to be made for the tiny stage, or the reduced company, or the subtle cuts. Perhaps for the cold creeping out of the concrete walls – heating, and loos, are promised for 2016 …
on Friday, February 08, 2013