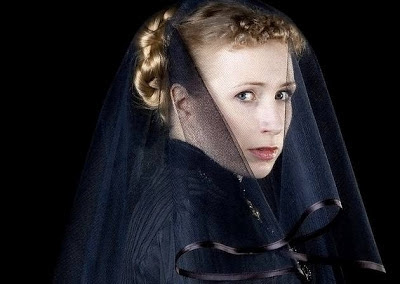 A Woman in Black stands and addresses her audience, still and expectant in the darkness.
She speaks naturally, as if we were friends, but the three tales she tells reflect the Victorian fascination with death and the macabre.
Rebecca Vaughan, mistress of the one-woman show [Austen's Women, I Elizabeth] brings these very different stories to life, using sound, lighting and especially her art of mime, filling the stage with credible characters and the paraphernalia of their lives. The show is directed by Guy Masterson, no stranger to the solo stage.
The first is a tale of love, ending in tragedy at a masked ball in Paris, the second a scientific story of potions and paralysis, ending in an echoing Sussex mausoleum. And the third, the most immediate, is a personal story of a Victorian villa and the nameless, shapeless evil that lurks within. All of them told with clarity and compelling energy; the two women who wrote them, and their servant who adapted and performed them, conspire to produce more than one involuntary shudder, even in the warm safety of the Cramphorn.

and for The Public Reviews:

M R James has appeared on this stage more than once, at least in impersonation.
Now, in a similar setting – leather armchair, candelabra – it's the turn of the sadly neglected female exponents of the ghost story.
Female Gothic is an amalgam of three spooky tales – alas, uncredited – from the genre, cleverly woven together, and brilliantly performed, by Rebecca Vaughan.

Here she is, in stern Victorian black, for all the world like Miss Jessell from that other great chiller, The Turn of the Screw. She begins by addressing us directly, then moves seamlessly into the first piece, a tale of love, Mary E Braddon's The Cold Embrace. It's a dark subject, with a tragic suicide, a heartless artist, and the icy grip of vengeance in Cologne. The characters, and their emotions, are brought superbly to life in a very natural, engaging style. The props the story needs are skilfully suggested, plucked out of the air: the artist's Meerschaum and his sketchbook, for instance. A reminder that the director of this chilling entertainment is Guy Masterson, unsurpassed as a one-man-showman.

The second story, [The Five Senses, by E Nesbit] owing more than a little to Dr Jekyll, and to the Modern Prometheus, is concerned with science and its experiments [again, impeccably mimed]. Professor Boyd Thomson, who chooses vivisection over the affections of his Lucilla – a pin-sharp middle-class characterization – and goes on to try a new potion on himself, its effect being to enhance sensory perception. An effect brought to vivid life in a virtuoso sequence, enhanced by sound and light. We could feel the prick of the syringe …
It ends in tragedy, of course, with the Professor paralysed in a mausoleum, as the narrator philosophises on science, magic, and "the depth of that gulf of fear that lies between the quick and the dead".
The last offering is very different, based on the same author's The Shadow. A tale told without artifice, in the first person, where "nothing is explained". A haunted suburban villa, a mother and baby, and a story all the more powerful for not being "artistically rounded off", and with the highest goose-bump count of the evening; one particularly thrilling moment when the narrator realises that the apparition is "not almost any more".

This effectively understated performance – no melodrama, no histrionics – is a strength of the show. As is the fact that these stories, being less well known, come to us fresh and original. They celebrate the women, prolific writers in this and other genres, who were eclipsed by their male rivals. And they leave their audience with a sense of unease, as all good ghost stories should. As Vaughan says by way of valediction, "Take care, my good Ladies and Gentlemen, there's awful strange things in this world."