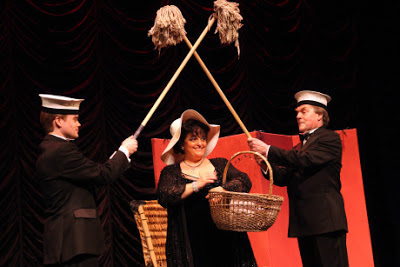 GILBERT AND SULLIVAN ABRIDGED
at the Civic Theatre
14.02.13

G&S, and amateur performers thereof, are ripe for gentle ribbing. Think Opera della Luna's Parson's Pirates, or the Dear Ladies of Stackton Tressell.
But to be successful, the take-off must be rooted in secure technique – you have to be good to be bad.
This show, still in the early stages of national tour, is simply bad. Only one trained singer, a backing track piano and a woeful unfamiliarity with words and music. It's a sad indictment when the audience know the lyrics better than you do. And it's a shame that they had to have music stands at all.
The second half brought some straws to clutch at – the surreal squeeze-box and the rap/beat-box patter song [both from David Osmond] showed what might have been. Jane Webster – experienced in opera and musical theatre – held the stage well, but a veil should be drawn over Eric Carte's contribution, which would have been embarrassing even on the amateur stage.
The whole canon was covered, from Thespis to the Grand Duke, and the evening was given some shape by a typically Gilbertian subplot, involving lost loves and an orphan boy.

for a more robust review [from Malvern] read this blogpost and the comments on it ...
on Friday, February 15, 2013

I entirely agree with your thoughts and have emailed the theatre to tell them so!

I couldn't agree more; or, to be more accurate, I think you're being kind, but maybe you've had to suffer more than me over the years!

This has to be just about the worst show I've experienced. The only thing that's close was a production of The Beggar's Opera in Edinburgh many years ago, which was so side-splittingly bad that I went a second time with a friend for the laughs. This one wasn't even funny. Quite apart from the lack of plot and the poor quality of the singing, it's apalling to think that they're still learning the words six shows into a run. It's the only show I can remember in which we left in the interval.