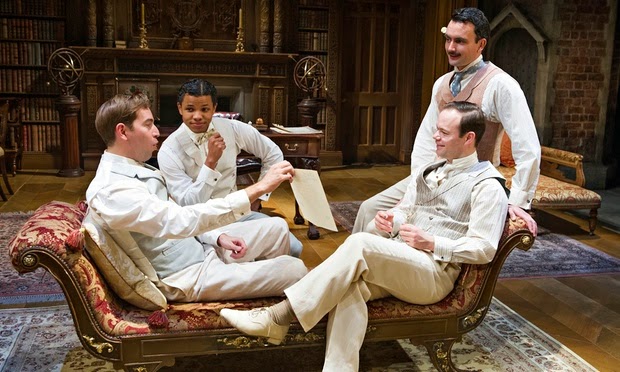 Royal Shakespeare Company at the RSC Theatre, Stratford on Avon


You may see a better acted, more entertaining Love's Labours, but surely not a more stylish one. The concept here – Edwardian England, a great country house, basking in the sun on the brink of war.
The house is Charlecote Park, scene of Shakespeare's youthful poaching, allegedly. It's also used for the RSC's companion piece, Love's Labours Won [Much Ado to you and me], set after the war, with Charlecote now a hospital for the wounded …
Christopher Luscombe's light-hearted production is full of delightful details. The “mad-cap lord” Berowne [Edward Bennett] begins his “three years fast” in the comfortably appointed library; it ends, prematurely, in mutual defeat up on the leads, Brideshead-fashion, in a brilliantly conceived scene. A strong cast, including Michelle Terry as a teasing Rosaline, and John Hodgkinson's Don Armado, at first Wilde-ly melancholic, then at the grand piano joining Peter McGovern's perky Moth in a bizarre duet So Well I Love Thee.


The Great War is just visible on the horizon – there are poppies by the fence, their petals raining down on Mars and Hector. This in the Nine Worthies sequence, ingeniously done by the “Navarre Players” as pastiche G&S.