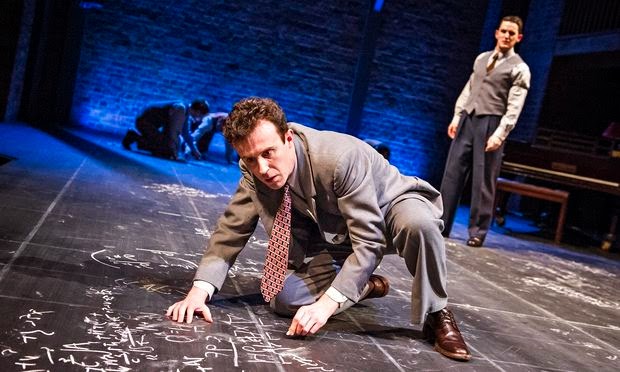 
“I have it within me to murder every last soul on the planet — should I not be scared?”
J Robert Oppenheimer, the genius behind the bomb that annihilated cities and hastened the end of World War II.
Tom Morton-Smith's ambitious piece brings to the stage this complex character – his politics, his physics, his acadmeic career and his private life. A little too much, perhaps. But it's a compelling evening, with a huge cast peopling Oppenheimer's worlds in Angus Jackson's energetic, eloquent staging.
The ensemble is impeccable – young socialists raising funds for the war in Spain, the scientists scribbling equations on the chalk-board floor, the military watching the tests.
John Heffernan is a revelation as Oppenheimer, with his pipe and his shades, his epiphanies and his eureka moments. He treats us as his students, lecturing us sternly but sympathetically. [There's no dumbing down here, incidentally, Stoppard please note. The German is not translated.] He is a private man, enthusiastic and driven, only occasionally passionate in any extrovert way. Thomasin Rand is excellent as his wife, Kitty, damaged, frustrated and a failure as a parent. And the Serbers, friends and colleagues, are credibly characterised by Jamie Wilkes and Sandy Foster. General Groves, a military man through and through, the polar opposite of the laid-back boffins, is brilliantly done by William Gaminara.
The dramatic conflict between the army and the academics is effective, but like other themes and tropes, tends to be overdone. Much of the play seems familiar, too, perhaps deliberately so. The parable of the chess-game grains of rice, the blind men and the elephant.
The staging is simple – we have to imagine the ranch and almost everything else. The bombs, though, do make an appearance – a boy emerges from one to relate the horrific aftermath.
Projection is cleverly used [as with Curious Incident we were glad to be in the gods], and there's some great live music, including an interval entertainment featuring, for Kitty, that old Louis Jourdain number What's The Use Of Getting Sober [When You're Gonna Get Drunk Again].
The piece is not without its flaws. But the subject matter is so important, and this production so intelligent, that it should be on everyone's must-see list when it transfers to the Vaudeville for an eight-week run.