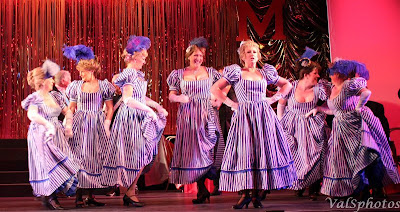 THE MERRY WIDOW
Trinity Methodist Music and Drama in the Civic Theatre
14.05.13

A wealth of operetta experience on and off stage for Trinity's latest Merry Widow.
An inauspicious first act, with leaden pace and an unexciting embassy setting, but things perk up after the interval, with the colourful Pontevedrian Night chez Glawari: superb national costumes and atmospheric lighting. And there are some successful ensemble pieces, too, like the Women Women number, twelve gentlemen lined up across the stage, or the game Grisettes in the Maxim's tribute, augmented by six lithe can-can girls [choreography by Julie Slater].
The orchestra, with real live harp [Lynne Creasey] is conducted by Trinity regular Gerald Hindes. Martyn Harrison, who directs, is new to this company, but is no stranger to the show. He's chosen to concentrate on the plot and the people, and there are certainly laughs to be had in Jeremy Sams' risqué and irreverent translation.
As Camille, Stuart Boother is a dashing young tenor in the Boe mould, well matched by Dee Mardi's enjoyably coquettish Valencienne. The Widow herself is given a lively, earthy performance by Alyson Denza – the crucial
Vilja song beautifully delivered. Her Danilo [Stephen Cooper] is not the most charismatic, more heavy artillery than light cavalry, but he does the right thing for the Fatherland in the end, to general relief and rejoicing.
Entertaining work from Patrick O'Connell as the old Baron, David Ehren as covert surveillance specialist Njegus, and, as two noble diplomats, Joe Gray and Patrick Willis.