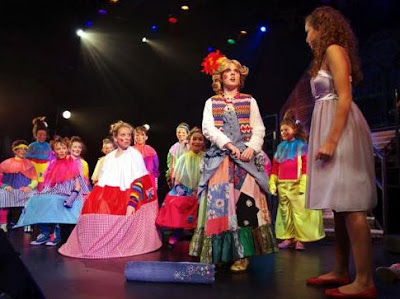 THE WIZ
Chelmsford Young Generation at the Civic Theatre
15.11.11

Production values could hardly have been higher for Young Gen's visit to the land of Oz, this time in Soul Music mode for The Wiz, a Broadway smash of 1975. An impressive set – stairs and scaffolding, with the Big Green Apple at the apex – pyrotechnics galore, thrilling sounds from the pit, and of course the famous vitality of CYGAMS' young performers.
Some of the production numbers were outstanding: the stage filled with green people, the hoofing in “Bad News”, the revivalist “Believe”, the Munchkins on castors. Excellent chorus vocals too, right from the overture, and some big, bold characterizations: Oliver Fox's Tin Man [loved his dance], Luke Higgins' Scarecrow, and Bart Lambert's lovely cowardly Lion, though he had to work to get past the wig and the mask. Dorothy was performed with confidence and charm by Alice Masters, and the kitsch Wicked Witch, Evillene, by Constance Lawton. I also enjoyed Katie Pridige's Addaperle, the witch who couldn't do the magic, and Ben Maple's posh gatekeeper. And proving that there are no small parts, Harry Brown getting every possible ounce of value from the Messenger.
Much to enjoy in this alternative to Over the Rainbow. If there was a weakness, it was that the big numbers which punctuated the action often demanded a style and a spirit that even these talented youngsters found hard to emulate.
The show was directed by Jeremy Tustin, with Bryan Cass the Musical Director.