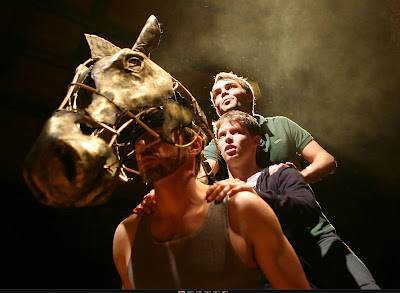 Almost forty years since this powerful play was premi鑽ed, and to the students who packed the Civic, taking notes and making design sketches, Shaffer must seem as remote, and as wordy, as Shaw.
LCT's touring revival of this 70s classic was superbly staged, with the beaten bronze of the horse heads glowing in the gloom of the stables. The amphitheatre, and the ever-present actors, echoed Ancient Greece, a theme running through the musings of troubled shrink Martin Dysart, played with gravitas and total sincerity by an excellent Malcolm James. His patient was Matthew Pattimore, who captured the desperate bewilderment of the teenager whose life is blighted by religion and his passionate worship of the horse. A fine performance, too, from Anna Kirke as his neurotic, helpless mother.
The climax of Act One, in which Alan rides his favourite horse at dead of night, was effectively staged Aidan Downing played Nugget. I liked the straw emblem hanging ominously over the arena, and the muted suggestion of the crucial act of blinding.
Michael Cabot's carefully crafted production makes a worthy revival of this important piece; though it's very much of its time, it can still speak to us today of the delicate balance between the normal and the sublime. The ambitious tour reaches Lowestoft, via Lincoln, at the end of the month.