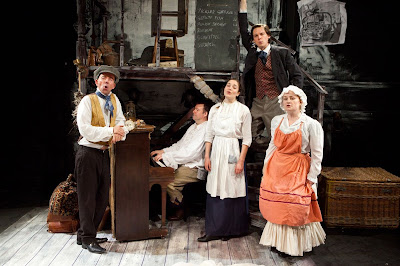 Eastern Angles at the Sir John Mills Theatre
26.11.2011
for The Public Reviews
Young Oliver Nicklefield has penned a piece for Mr Crumbles' troupe of Thespian Adventurers.
Within its leather-bound pages lurk a cornucopia of characters with strangely familiar names: Little Mell, Old Sal, Miss Haversack, Obadiah Snoop, Foggotty and the Aged P. Plus some un-canonical gatecrashers like the sinister Scotsman Tosser McCaber.
Great fun was had catching the references as they flew by, dodging the puns, the local jokes, the double entendres and the naughty innuendos. [Those old enough to remind I'm Sorry I'll Read That Again will get some idea of the style.] And of course being roped in and humiliated in the intimate Gatacre Road auditorium, doubling here as a most convincing Old Curiosity Shop. And not just Dickens, either, Ernest's handbag plays a key role, and there are name checks for Sid and Nancy, as well as [Bob] Marley's Ghost. Panto largely excluded, thank heavens, save for a passing reference to Ebenezer's Cave.
The five actors in the Crumbles company – how nice to see a little of their Hamlet from the wings – were kept very busy, dashing around the tiny acting area and changing costumes on the run. All busting a gut to win a coveted OTTA – the award for Over The Top Acting. Joel Sams made an appealingly innocent Tiny Tom [don't ask – the origin of his moniker was the subject of one of many marathon running gags] who seeks his benefactor as he waits for his testimonials to materialise. And he played the fiddle beautifully: this must be the only Christmas show where the lovers duet sharing a violin.
His Dorabella [and his long lost sister] were played by Gabrielle Douglas, her Moody juvenile a close relative of the Infant Phenomenon. She vied for the role with the more mature Mrs Crumbles – the showdown where each strove to outdo the other's uppitiness was priceless. Sally Ann Burnett was Mrs C, as well as Suffolk Favourite Foggotty and many others, including the filthy Mrs Midden, flies buzzing around her head. Greg Wagland was several possible benefactors – the convict Magpie, the old Gent, McCaber, and most impressively, the tragic Miss Haversack. And Zach Lee was the inventive Jammy Dodger, as well as the humble Snoop [from Wolverhampton]. He also got the biggest laugh of the matinée – playing some distant cousin of Mr Dick, I think – with an unrepeatable slur on neighbouring Norfolk.
Richard Taylor's music added to the fun – I liked the operatic Betrayal aria, and the opening number, reprised at the end, with just a splash of G&S.
Ivan Cutting's pacy direction kept the momentum going, even through the often impenetrable plot, from the clever opening to the denouement at Newmarket, providing a witty, pretty seasonal entertainment for those who seek respite from sing-alongs, sparkle and star vehicles.
production picture by Mike Kwasniak