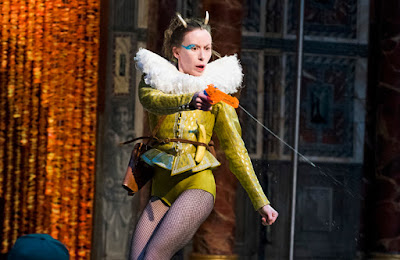 Shakespeare's text cut and “improved”. Extraneous songs and dances making for a long evening.
No, not Emma Rice's “Wonder” Dream but Purcell's “Restoration Spectacular” The Fairy Queen, first staged in London more than 300 years ago. Nothing new under the watery moon.
Very much a calling-card production from Rice, taking the helm at Shakespeare's Globe following two decades from Rylance and Dromgoole.
A lacy metal forest outside the building. “WONDER” in lights over one of the merchandise carts. And inside, huge white balloons fill the sky, and semi-transparent green tree-trunks hang down into the yard.
Over the doors, two tech desks, signalling another departure: amplification and lighting effects. Of course, as is often argued, Shakespeare would have used them had they been available. But they weren't, and he didn't. And certainly not in this space, designed for a very different style.
“Rock the Ground” - a quote from Act Four – in neon at the back of the stage. A lengthy, uncanonical, but very funny prologue introduces the Globe Stewards who will become the rude mechanicals. Rita Quince and her crew, with Health and Safety Officer Nick Bottom the only man.
We're a long way from Warwickshire. In a weird Grexit, Athens is expunged, and the woods given a local habitation and a name – London, Bankside, Hoxton. Hipsters weeds are the lovers' choice: no longer two of each kind, since one of the couples is gay.
The feel is of an Indian wedding – Tanika Gupta the dramaturg here – and sitar music underscores much of the action. The songs – sometimes settings of Shakespeare's verse – range wider, with George Formby and David Bowie sharing the bill.
The rough magic of the Fairies is energetic, with much choreography. They are Tudor-clad, but it is dressing-up, since Katy Owen's engagingly nimble Puck has flashing trainers and a day-glo water pistol, and Zubin Varla's menacing Oberon swigs from a plastic bottle of cheap cider.
Lots of laughs, though not all of them are Shakespeare's doing. Mixed fortunes for the text - “you ugly bitch” is not a modern equivalent of Lysander's cruel but witty put-down. Meow-Meow's Titania delivers the nine-men's-morris speech movingly; Ankur Bahl's Helenus has a lovely soliloquy in the first scene.
The Pyramus and Thisbe sequence benefits from being trimmed, and is very amusingly done by the mechanicals with Rita Quince at the keyboard.
But as “Jill will have Jack / No looking back” is warbled as the play closes, it suddenly seems a “long age of three hours”.

I'm not sure I'm one of the “purists” and “traditionalists” whose reservations many reviews have airily dismissed. I've seen, and loved, some radical Dreams in my time: lesbian lovers, a boarding school, early Hollywood. But I found it hard to warm to this lively, loud staging, full of tricks and ideas, which seems to be aimed especially at people who don't really get Shakespeare. Of whom, unless she has been seriously misrepresented by the media, Emma Rice is one. Meant, surely, as a celebration of this place, in this anniversary year, it comes across as apologetic and patronising: you'll like this play better if we sugar the pill with gimmicks and jokes. Let's hope that the new audiences it brings in will stay for what looks like a varied season, finishing with a revival of last year's Merchant of Venice.
on Monday, May 09, 2016