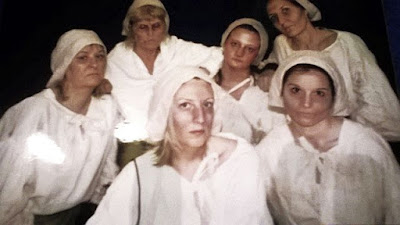 Steve Gooch's documentary play – first staged over forty years ago at the Half Moon Theatre – takes a realistic look at the lives of women deported to Australia in the early 1800s.
It's a strong premise for drama – think Our Country's Good – with six very different women confined below decks in a cramped cell. Foul air, foul language and brutal floggings.
As Nance [Lin Pollitt] caustically remarks: “... marvellous, the pairin' off in 'ere. There's Madam Lesbos and the late Prime Minister in one corner, Elizabeth Fry an' the vomitin' soldier in the other, an' I'm stuck with labourin' 'Ercules here. 'Oo shuffled this pack? “
Sometimes the historical detail impedes the dramatic impact, but there are some violent clashes, and just enough development to keep the audience interested. And the central image is clear – women exploited by the corrupt men above them.
Neatly underlined by the excellent setting, the captain's quarters aloft, and Cell 17 in the hold [there are over one hundred women on board – three of them will never see land again]. Effective lighting, with oil lamps overhead. And convincing character studies from the company, including Pollitt's potato-stealing radical, and Sara Thompson's fiery, brash Charlotte.
Sophie Howlett brings a tender pathos to Pitty, clutching her rag doll, protected by Laura Fava's intense Madge. Hilary Andrews plays Win, “matron” of the cell; Lorna Fassenfelt is the sea-sick Sarah, who develops a touching relationship with the boy Tommy [Danny Hemmings].
Two ruthless, grasping men, both convincingly played here, make life difficult for the convicts: Barry Howlett's brutal Sarge and Melvyn Freake's callous Captain, refusing to take on fresh supplies at Cape Town because it would dent his profits.
These women – petty criminals, prostitutes, political agitators - find strength and support in their enforced companionship. They've a kettle for a brew-up in their quarters, a library and a surgeon [Tim Murphy] on board. And at the end, fashioning sun hats from pillow-cases, they walk down the gang-plank singing, with something approaching optimism.


Vernon Keeble-Watson's impressively imaginative production opens a window onto a barbaric, shameful episode in our not-too-distant past.
on Friday, May 13, 2016