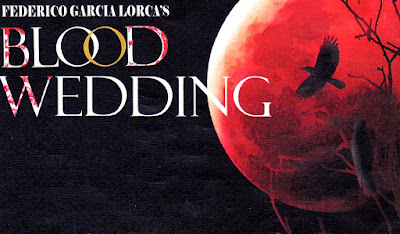 Lorca's Spain is light years away from 21st century Havering. A bold choice, then, for these drama students, and an impressive attempt at a classic of European theatre.

Julia Stallard's production is pared-back, and very stylish. Black drapes, black costumes, with an occasional, eye-catching splash of colour – the bowl of fruit, the wool, the scarlet shawls. The young actors have learnt the power of stillness, of significant pauses. There is an inner strength in Leah Rowlands' Mother, for example. Words are weighed, souls searched.

It's the poetical text that presents the biggest challenge here – not sure whose translation this is; not, I think, the Tanya Ronder or the Ted Hughes. Sometimes passions have more shrillness than strength. Sam Fava's Leonardo seems the most comfortable with the spoken word – a fine, intense performance. Sophie Honeywell gives a lively characterization, now shy, now feisty, of the young bride who leaves her new husband [Ben Antoniades] to ride off with her lover. A strong presence from Jessica Ravate as La Criada, the servant who tells the Bride of Leonardo's attentions. Good work too from Callum Cresswell as the Father of the Bride, and Rebecca Lawrence, stepping in to the role of Leonardo’s reserved, poised wife at just eight days' notice. Louisa Collins-Farrow plays her mother, as well as one of the Greek chorus Woodcutters.

The later scenes leave naturalism behind, with Moon [Gvidas Milinkis] and Beggarwoman [Lucy Mason] witnesses to the distant tragedy. It's the stage pictures, often imaginatively lit, which stay in the mind – the blood red moon, the bearers and the biers, the double portrait with gifts – and the contrasts: closeness amid the decorous distance, like the two profiles in a rare moment of intimacy, or spontaneity, such as the girls' greeting, amid the solemn formality.
on Thursday, May 19, 2016

i have read the review, my name was the only one who was not mentioned which is Jessica Ravate, i am slightly dishearted as i worked extremely hard for this.

Sorry you felt neglected, Jessica. A review is not an adjudication, and it's not always appropriate to name-check every performer. In fact yours was not the only name omitted. But I am aware of how much hard work must have gone into everyone's performance, and I have amended the review accordingly.